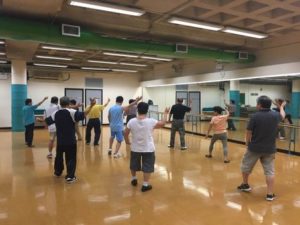 “A growing body of carefully conducted research is building a compelling case for tai chi as an adjunct to standard medical treatment for the prevention and rehabilitation of many conditions commonly associated with age,” – Peter M. Wayne

Tai Chi has been practiced for thousands of years with benefits for health and longevity. Tai Chi training is designed to enhance function and regulate the activities of the body through regulated breathing, mindful concentration, and gentle movements. Only recently though have the effects of Tai Chi practice been scrutinized with empirical research. But, it has been found to be effective for an array of physical and psychological issues. It appears to strengthen the immune system, reduce inflammation, increase the number of cancer killing cells in the bloodstream and improve cardiovascular function. Tai Chi has also been shown to help the elderly improve attention, balance, reducing falls, arthritis, cognitive function, memory, and reduce age related deterioration of the brain.

Because Tai Chi is not strenuous, involving slow gentle movements, and is safe, having no appreciable side effects, it is appropriate for all ages including the elderly and for individuals with illnesses that limit their activities or range of motion. So, with indications of so many benefits it makes sense to explore further the effects of Tai Chi training on physical and psychological well-being. One way to do this is to look at the short-term acute effects of Tai Chi training on practitioners.

In today’s Research News article “Acute Effects of Tai Chi Training on Cognitive and Cardiovascular Responses in Late Middle-Aged Adults: A Pilot Study.” (See summary below or view the full text of the study at: https://www.ncbi.nlm.nih.gov/pmc/articles/PMC5831874/ ), Cheung and colleagues recruited healthy older adults, aged 50 to 65 years, who had either at least 1 year of Tai Chi practice or no Tai Chi practice. The Tai Chi practitioners were asked to practice for 10 minutes while the non-practitioners were asked to stand quietly. For 1 minute before and after the 10-minute practice period they were measured for heart rate, oxygen saturation in the blood, perceived stress and palmar skin temperature. The Electroencephalogram (EEG) from the frontal cortex was measured and used to gauge attention and meditation levels.

So, improve cardiovascular and cognitive function with Tai Chi.

“It’s a rare aspect of exercise. Unlike almost every other form of physical activity, tai chi demands focus, which is central to its meditative benefits. “Even with yoga, you can do it and have your mind be somewhere else. It’s very hard to do tai chi and not be present.” – Michael Irwin