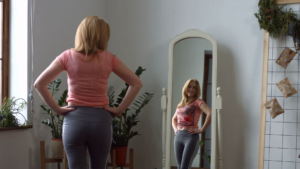 “Yoga, with its tenets of peace, self-compassion, and acceptance, is a path to softening and even transforming such harsh beliefs. Through the path of yoga, we practice harmony within and strengthen our relationship with our body.” – Jennifer Kreatsoulis

The self is a concept and is created by thought. In other words, there’s a process involving thinking that creates the concept of a self. This is a verb. We are not a self, we are producing a self, we are selfing! This suggests that the self can change and grow with circumstances. One important aspect of the self-concept is one’s body image.

The media is constantly presenting idealized images of what we should look like. These are unrealistic and unattainable for the vast majority of people. But it results in most everyone being unhappy with their body.  This can lead to problematic consequences. In a number of eating disorders there’s a distorted body image. This can and does drive unhealthy behaviors.

In the media, yoga is portrayed as practiced by lithe beautiful people. This is, of course, unrealistic and potentially harmful. But yoga is also an exercise that tends to improve the body and is also a mindfulness practice and mindfulness practices appear to have profound effects on the idea of self. Hence, it is unclear whether yoga practice promotes a healthy body image or contributes to harmful distortions of body image.

In today’s Research News article “Yoga and body image: Findings from a large population-based study of young adults.” (See summary below or view the full text of the study at: https://www.ncbi.nlm.nih.gov/pmc/articles/PMC5869146/), Neumark-Sztainer and colleagues performed a large, population-based study on eating and weight-related outcomes. They recruited male and female adolescents from Middle and High Schools and followed them from adolescence to young adulthood. They administered questionnaires and followed-up at 5-year intervals. The young adults were measured for yoga practice, body size, and body satisfaction 10 and 15 years after the initial recruitment at an average age of 31 years.

So, improve body image with yoga.

“One of the first tenants of yoga is ahimsa (nonviolence)—do no harm to yourself or others. The media creating unrealistic images of beauty is harmful to you, and it’s up to you to set those images aside, love yourself and be kind to yourself. You are beautiful as you are.” – Dianne Bondy