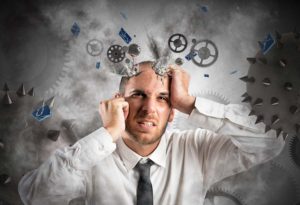 “mindfulness is most impactful when it is a way of being that is seamlessly interwoven into daily life, rather than simply a standalone practice. Although it may seem difficult to abandon our attachment to electronic devices and ditch the urge to work nonstop, the space that we create for living, loving, and interacting with the world is by far worth the effort.” – Grace Bullock

In western culture working hard is encouraged. But, it should not become an addiction. Work, like many good things can be overdone and become damaging to productivity and the individual’s psychological and physical health and well-being. We refer to work addiction as workaholism. It has been estimated that over 10 million Americans work in excess of 60 hours per week and even though the average American receives 13 paid vacation days per year over a third do not take a single day of vacation and when they do, 30% report feeling constantly worried about work while on vacation. Most bring laptops and cell phones with them to work while on vacation. Workaholics say that they have to rush through their day to accomplish all that they want to and at the end of the day they feel that they didn’t accomplish all that they could. This overwork spills over into family life where workaholic marriages are much more likely than average to fail, with a 55% divorce rate.

The treatments for workaholism generally resemble treatments for other addictions. Mindfulness training has been shown to be helpful in treating addition and preventing relapse. Mindfulness has also been shown to be effective for treating and preventing burnout at work. But, to my knowledge there have not been published research studies on the application of mindfulness training for the treatment of workaholism. This was, however, addressed in today’s Research News article “Meditation awareness training for the treatment of workaholism: A controlled trial.” See summary below or view the full text of the study at: https://www.ncbi.nlm.nih.gov/pmc/articles/PMC5520118/, Van Gordon and colleagues recruited full-time male and female workers (mean age of 39 years) who scored high on a workaholism scale and created meditation training and wait-list control groups matched on sex, age, education level, salary, and employment type. The meditation training consisted of 2-hour meditation workshops once a week for 8 weeks and guided meditation CDs to continue practice at home. They were measured before and after training for workaholism, job satisfaction, work performance, anxiety, depression, stress, and hours of work per week both at work and at home.

They found that the meditation group, compared to baseline and to the wait-list control group, showed significant reductions in workaholism, hours worked per week, anxiety, depression, and stress and increases in job satisfaction. Hence, the meditation practice produced significant relief of workaholism. In addition, job performance was unchanged even though they worked fewer hours. These results suggest that a randomized controlled clinical trial is warranted with an active control group and perhaps a comparison of different therapies. They also

suggest that meditation practice is an effective treatment for workaholism.

So, improve workaholism with meditation.

“It is possible to move through the drama of our lives without believing so earnestly in the character that we play. That we take ourselves so seriously, that we are so absurdly important in our own minds, is a problem for us. We feel justified in being annoyed with everything. We feel justified in denigrating ourselves or in feeling that we are more clever than other people. Self-importance hurts us, limiting us to the narrow world of our likes and dislikes. We end up bored to death with ourselves and our world. We end up never satisfied.”
― Pema Chödrön

Workaholism is a form of behavioral addiction that can lead to reduced life and job satisfaction, anxiety, depression, burnout, work–family conflict, and impaired productivity. Given the number of people affected, there is a need for more targeted workaholism treatments. Findings from previous case studies successfully utilizing second-generation mindfulness-based interventions (SG-MBIs) for treating behavioral addiction suggest that SG-MBIs may be suitable for treating workaholism. This study conducted a controlled trial to investigate the effects of an SG-MBI known as meditation awareness training (MAT) on workaholism.

Male and female adults suffering from workaholism (n = 73) were allocated to MAT or a waiting-list control group. Assessments were performed at pre-, post-, and 3-month follow-up phases.