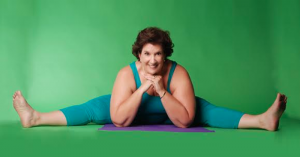 “You get to thinking that yoga and its health benefits, such as stress reduction and improved fitness, are best for thin people, and not so much for the 36 percent of U.S. adults who are obese. Not true. Yoga is for all types of shapes and sizes.” – Laura McMullen

Obviously, there is a need for effective treatments to obese individuals. But, despite copious research and a myriad of dietary and exercise programs, there still is no safe and effective treatment. Mindfulness is known to be associated with lower risk for obesity, alter eating behavior and improve health in obesity. This suggests that mindfulness training may be an effective treatment for overeating and obesity alone or in combination with other therapies. Yoga may be particularly beneficial for the obese as it is both a mindfulness practice and an exercise. Yoga practice has been shown to have a myriad of physical and psychological benefits. These include significant loss of body weight and improvement in health in the obese.

They found that after the 8-week intervention both groups had significant reductions in body size and blood leptin levels but the yoga plus diet group also had significant increases in the resting metabolic rate and blood adiponectin levels while the diet alone group did not. On the other hand, the diet only group had a significant reduction in blood high density lipoprotein – cholesterol that did not occur in the yoga plus diet group.

These results are particularly interesting because the two groups were estimated to have the same deficit in caloric intake plus expenditure with the diet only group having a 500 Kcal per day reduction in intake while the yoga plus diet group had a 300 Kcal per day reduction in intake along with a 200 KCAL per day increase in expenditure. Hence the differences in the results for the two groups were not due to differences in total energy reduction.

So, Increase Resting Metabolic Rate in Obese Women with Yoga.

“The benefits of practice are endless. As a light form of aerobic exercise, yoga can help to alleviate common symptoms of being affected by obesity.” – Laurel Dierking

Weight management is an important strategy to prevent the consequences of obesity. The aim of the study was to compare the effect of yoga practice and energy-restricted diet on resting metabolic rate (RMR), anthropometric indices, and serum adiponectin and leptin in overweight and obese women.

Obese or overweight women were divided into two groups: yoga practicing and energy-restricted diet. Exercise trials consisted of 60-min Hatha yoga equal to 200 kilocalories (kcal) combined with 300 kcal restriction per day, and an energy-restricted diet consisted of 500 kcal restriction per day. The intervention period for both the groups was 8 weeks. RMR, anthropometric indices, and serum adiponectin, leptin, and lipid profiles were measured at baseline and at the end of the study.