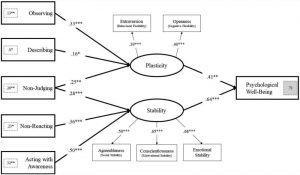 Mindfulness is Associated with Stable and Flexible Personalities

Recently, these characteristics have been organized into two overarching metatraits; stability and flexibility. The relationship of trait mindfulness to these two metatraits has not been explored.

In today’s Research News article “The Mindful Personality II: Exploring the Metatraits from a Cybernetic Perspective.” (See summary below or view the full text of the study at: https://www.ncbi.nlm.nih.gov/pmc/articles/PMC5979271/), Hanley and colleagues examine the relationship of the enduring characteristic of mindfulness with the stability and flexibility metatraits. The researchers recruited adult participants online and had them complete measures of the Big 5 Personality Traits, mindfulness, and psychological well-being. From the Big 5 they extracted measures of the metatraits stability and flexibility.

This study is correlational and causation cannot be concluded. But these results are in line with previous findings of the positive relationship of mindfulness with the Big 5 personality traits. The findings extend this positive relationship to the two stability and flexibility, the metatraits derived from the Big 5 traits. They suggest that mindfulness is associated with stable and flexible personalities. Mindful individuals do not overreact to distractions, interference, unexpected events and at the same time are more open and able to respond differently and creatively to situations. Hence, mindful people have personalities better able to deal with the ups and downs and twists and turns of life.

“Overall, the findings . . . expand upon previous mindfulness-related research by demonstrating a strong relationship between mindfulness and enhanced level of some personality characteristics including openness, theory of mind, suggestibility and pro-social behaviour.” – Hossein Kaviani