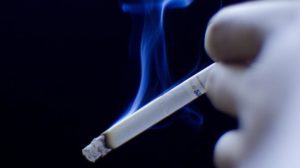 “mindfulness home practice significantly predicted reduced smoking behavior, even after controlling for initial craving and cigarette use. In fact, every day the participants meditated meant 1.2 fewer cigarettes, and every day they were mindful with their cravings and in everyday activities meant 1.52 fewer cigarettes.” – Mayo Clinic

One problem is that nicotine is one of the most addictive substances known and withdrawal from nicotine is very stressful, producing many physical and psychological problems, including negative emotional states and depression. In essence, the addict feels miserable without the nicotine. This promotes relapse to relieve the discomfort. Better methods to quit which can not only promote quitting but also prevent relapse are badly needed. Mindfulness practices have been found to be helpful in treating addictions, including nicotine addiction, and reducing the risk of relapse. In order to quit smoking, the addict must learn to withhold responding to smoking related cues. That is the smoker must be better able to inhibit the smoking response.

In today’s Research News article “Effects of a brief mindfulness-meditation intervention on neural measures of response inhibition in cigarette smokers.” (See summary below or view the full text of the study at: https://www.ncbi.nlm.nih.gov/pmc/articles/PMC5784955/ ), Andreu and colleagues explore a possible mechanism by which mindfulness may affect smoking cessation; improved response inhibition. This is the ability to stop or withhold a behavior that may be highly motivated. Obviously, smoking is strongly motivated and a behavior that is very hard to stop or withhold.

They recruited adult smokers and exposed them to a cigarette and either provided them with a recorded mindfulness instruction or were told to cope with their urge to smoke in any way they could. They then had the Electroencephalogram (EEG) recorded while performing a smoking go/no-go task in which they pushed a button each time a picture was presented with a particularly colored frame on a computer screen and did not press the button when the picture had a different colored frame. The pictures were either smoking related or neutral. The go-no-go task is a standard test for response inhibition.

They found that there were no significant differences between the error rates or response speeds between the mindfulness or no instruction groups on the go/no-go task. But there were differences in the EEG. During the task the changes in the electrical activity that occur in response to the pictures was recorded. These event-related potentials or ERPs are the fluctuations of the signal after specific periods of time which are thought to measure different aspects of the nervous system’s processing of the stimulus. The P3 response in the evoked potential (ERP) is a positive going electrical response occurring between a 3 to 5 tenths of a second following the target stimulus presentation. These responses were significantly larger with the smoking related than neutral pictures. Importantly, the mindfulness instruction group had significantly smaller P3 responses on the no-go trials than the no-instruction group.

The P3 component is thought to reflect response inhibition. The lower P3 response after mindfulness instruction suggests that mindfulness reduces the effort needed to withhold a response when needed (no-go trials). By paying closer attention in the present moment, detection of the no-go stimulus may be enhanced making it easier to withhold responding. Hence, the results suggest that mindfulness improves response inhibition in smokers. This may be, in part, the mechanism by which mindfulness training improves smoking cessation and reduces relapse. It makes it easier to not respond to smoking related situation with smoking.

So, improve response inhibition to quit smoking with mindfulness.

“mindfulness training may actually target the addictive loop, breaking the relationship between craving and smoking and resulting in greater smoking cessation.” – Lori Pbert 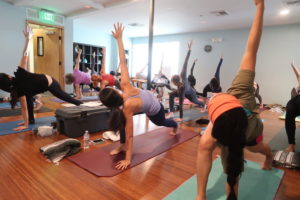