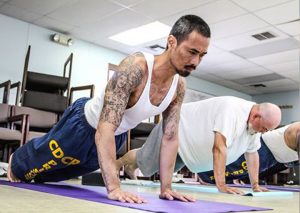 “Yoga has changed my life in a lot of ways. I’m so glad I’m doing this, for the confidence-building and the physical aspects. I have mad anxiety—I’d give my life for a Xanax right now—but I don’t need it as much with yoga.” – Keri (Prisoner)

Contemplative practices are well suited to the prison environment. Mindfulness training teaches skills that may be very important for prisoners. In particular, it puts the practitioner in touch with their own bodies and feelings. It improves present moment awareness and helps to overcome rumination about the past and negative thinking about the future. It also relieves stress and improves overall health and well-being. Finally, mindfulness training has been shown to be effective in treating depression, anxiety, and anger. It has also been shown to help overcome trauma in male prisoners. Yoga practice, because of its mindfulness plus physical exercise characteristics, would seem to be ideal for the needs of an incarcerated population. Indeed, it has been shown to be beneficial for prisoners.

In today’s Research News article “Imprisoning Yoga: Yoga Practice May Increase the Character Maturity of Male Prison Inmates.” (See summary below or view the full text of the study at: https://www.ncbi.nlm.nih.gov/pmc/articles/PMC6584840/), Kerekes and colleagues recruited male adult prisoners and randomly assigned them to 10 weeks, once a week, for 90 minutes of either yoga training or physical activity. They were measured before and after training for temperament (novelty seeking, harm avoidance, reward dependence, and persistence) and character self-directedness, cooperativeness, and self-transcendence).

Engaging in exercise appears to be beneficial for male prisoners. Novelty seeking tends to drive impulsiveness that is a problem for prisoners. Thus, reducing novelty seeking should improve their behavior. Exercise also appears to increase the prisoner’s ability to control their behavior by increasing self-directedness. Yoga is a disciplined practice. So, it is no surprise that it would produce greater self-discipline in the practitioner. This should assist the prisoner in having greater control of their behavior, which should, in turn, improve their ability to function effectively in prison and in society when they are released.

So, improve prisoners’ self-directedness with yoga.

“[Prisoners] said that it’s improved their mental health and self-awareness. It’s allowed them to better handle the daily difficulties of life in prison. It’s taught them to “respond, not react.” It’s bolstered their relationships with other inmates and with their families outside the prison walls. It’s introduced them to mindfulness. It’s strengthened them mentally and physically. It’s given them a sense of inner peace. Yoga has radically changed these men’s lives for the better.” – Taylor O’Sullivan

Background: A specific personality profile, characterized by low character maturity (low scores on the self-directedness and cooperativeness character dimensions) and high scores on the novelty seeking temperament dimension of the temperament and character inventory (TCI), has been associated with aggressive antisocial behavior in male prison inmates. It has also been shown that yoga practiced in Swedish correctional facilities has positive effects on the inmates’ well-being and on risk factors associated with criminal recidivism (e.g., antisocial behavior). In this study, we aimed to investigate whether the positive effect of yoga practice on inmates’ behaviors could be extended to include eventual changes in their personality profile.

Methods: Male prison inmates (N = 111) in Sweden participated in a randomized controlled 10-week long yoga intervention trial. Participants were randomly assigned to either a yoga group (one class a week; n = 57) or a control group (free of choice weekly physical activity; n = 54). All the inmates completed the TCI questionnaire before and after the intervention period as part of an assessment battery.

Conclusion: A 10-week-long yoga practice intervention among male inmates in Swedish correctional facilities increased the inmates’ character maturity, improving such abilities as their capability to take responsibility, feel more purposeful, and being more self-acceptant—features that previously were found to be associated with decreased aggressive antisocial behavior.

One thought on “Improve Prisoners’ Self-Directedness with Yoga”