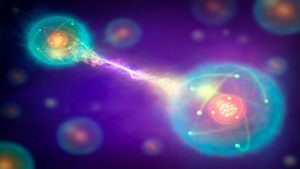 “If quantum mechanics hasn’t profoundly shocked you, you haven’t understood it yet. Everything we call real is made of things that cannot be regarded as real.” – Niels Bohr

The idea of Quantum Entanglement has shaken the world of physics contradicting classical physics including relativity. It is a very complex notion that is difficult to express outside of complex mathematical expressions. But in its essence, it suggests that matter is entangled with other matter with the states of particular particles linked to the states of other particles even over large distances. So, when a photon (quantum of light) changes its state, an entangled photon simultaneously changes its state even far away.

“Quantum entanglement is a label for the observed physical phenomenon that occurs when a pair or group of particles is generated, interact, or share spatial proximity in a way such that the quantum state of each particle of the pair or group cannot be described independently of the state of the others, even when the particles are separated by a large distance.” – Wikipedia,

This is not just a theoretical notion. As strange as it may seem there has accumulated evidence that Quantum Entanglement occurs ubiquitously in nature. Its implications are profound and revolutionize our views of the nature of the universe including notions of space and time themselves. Without belaboring the immensely complex physics and mathematics underlying the notion, the idea of Quantum Entanglement fits amazingly well with eastern spiritual thoughts, including the notions of mindfulness and enlightenment.

Everything is interconnected. This is a notion fundamental to eastern spiritual teachings. The Buddha referred to this as interdependent co-arising. The teaching was that everything arises in dependence upon multiple causes and conditions; nothing exists as a singular, independent entity. Indeed, it is evident to anyone who wishes to look closely at anything that it is connected to everything else. In other words, everything that happens is entangled with everything else and nothing can be viewed solely alone without reference to other things.

The paper that this may be printed on is in one way or another connected to everything else in the universe. The paper was manufactured from tree pulp. For the tree to have grown and produce this pulp there was sunlight, soil, water, and seeds provided by prior trees. The harvesting of the trees required lumbering and transportation of the trees to a mill. The manufacturing requires machinery that was invented by people who were trained based upon the accumulated knowledge of generations. After manufacture it was transported by truck requiring trained drivers, fuels, roads etc. all of which required a myriad of other components and actions. The actual atoms of which it is composed were created billions of years ago in the explosions of stars called supernovas. These, in turn stretch back to the Big Bang itself, where all matter and energy emerged at once. Perhaps by now you get the idea that the piece of paper is connected to everything else on the universe.

The notion of Quantum Entanglement indicates that all particles created at the same time are entangled and the state of any one of them is affected by all the others no matter where they are. Since, all particles emerged with the Big Bang, then all of them are entangled. This notion then is the science of physics way of expressing that everything is interconnected even on the quantum level of subatomic particles. This includes us. We are all entangled both on the fundamental quantum level and also on the perceived physical level. Each of us is connected to everyone else and to everything else in the universe. It’s all one.

The notion of Quantum Entanglement indicates that the linkage of particles can occur simultaneously over very large distances, distance large enough that any effect of one particle on the other would have to move at faster than the speed of light. This suggests that their entanglement is in the now. Time is irrelevant. Just as consciousness exists only in the now where there is no time. This suggests the interesting possibility that consciousness itself is an entangled phenomenon.

Consciousness has been termed as an observerless observer; a phenomenon where causes have no further effects. Something registers what is going on but is not itself changed by it and doesn’t affect anything else. It’s an end point on a chain of causation. This is much like the effect of a change in a particle producing instantaneous changes in another without further consequence. Perhaps, then, consciousness itself results from Quantum Entanglement.

Consciousness itself may be also entangled at the quantum level. It’s long been an understanding in quantum mechanics that the act of observing something fundamentally changes it. As a result, it is impossible to determine more than one aspect of a particle at a time. The act of observing one aspect changes the others. This gets even deeper on the quantum level where the classic double slit experiment demonstrated that observations actually change the behavior of particles. Indeed, “observations not only disturb what has to be measured, they produce it… We compel [a quantum particle] to assume a definite position. In other words, we ourselves produce the results of measurements.” – Pascual Jordan

“You can’t connect the dots looking forward; you can only connect them looking backwards. So you have to trust that the dots will somehow connect in your future. You have to trust in something – your gut, destiny, life, karma, whatever. This approach has never let me down, and it has made all the difference in my life.” – Steve Jobs

Arguably the most powerful and fundamental concept that the Buddha taught was the idea of Dependent Origination. It is basically the notion that everything that occurs results from everything that has gone before it. As the Buddha stated “if this exists, that exists; if this ceases to exist, that also ceases to exist.” In essence he taught that if any component that leads up to an event or thing had not occurred then the event or thing does not occur, that all things are interconnected and things only originate dependent upon the occurrence of all other things. So, if you see a butterfly its existence only occurred because of the entirety of the physical history of the universe. If anything had been different then the butterfly would either not be present or would be different in some way. In a more personal sense, what we are is an expression of everything that happened in the past and all that is here in the present. Had anything been different we’d be different.

This notion projected forward in time suggests that what we do now will impact what happens in the future. If we do one thing the future will be different than if we do another. Since everything is causally connected to everything else, whatever occurs effects everything else that occurs in the future. The Buddha’s teaching preceded chaos theory by 2500 years, yet essentially predicts the same things. The frequently cited example in chaos theory states that a butterfly flapping its wings in China effects a hurricane in the Atlantic Ocean. This is based upon the same ideas as dependent origination that all things are interconnected. Keep in mind that Dependent Origination doesn’t mean that the wings flapping produces the hurricane, although it may, it simply means that it would be a component among everything else that is happening to bring about the hurricane. It would not be the same if the butterfly hadn’t flapped its wings, perhaps only in a minuscule way or perhaps in a major way. That would depend on everything else going on and the chain of causation unleashed by the flapping wings.

Dependent Origination is a powerful teaching that is very often misunderstood. It is the basis for much of the Buddha’s teachings, including the notion of Karma, which is probably the most misunderstood concept in Buddhism. The literal meaning of the Pali word Karma is action. It doesn’t have a mystical meaning. It simply means that actions have effects. Karma simply states that what we do effects the future including our future as a result of the causal connections between everything and everything else. If we perform a good deed, it is likely that it will bring about good in the future and that may very well bring us personal good in return. That is not absolutely certain. But, good deeds would make it more likely that good things will happen to us in the future. That is called good Karma. Conversely, if we perform actions that are harmful to others, it is likely that bad things will happen to us in the future. This is not predetermined as everything that happens is dependent upon everything else. But, it shifts the likelihood of the outcome. That is called bad Karma. The effects of Karma may be immediate or they may take many years to occur or as some believe even carry into future lifetimes.

Sometimes Karma acts by the effects of our actions on ourselves. These could have a psychological effect causing us to view ourselves more positively or negatively that can then affect how we act in the future. Karma can act through others. I’ve had students many years in the past who I don’t even recall send me messages letting me know that what I taught them changed their lives. My teaching produced Karma. Many years later the students’ messages affected me, making me feel good about my career and myself. On the other hand, I’ve received messages on student evaluations of my courses that they saw my course as a waste of time and money. Once again my actions of teaching produced Karma, that came back to affect me in negative ways. The action of writing this essay produces Karma, the nature of which emerge in the present, with my good feeling about having stopped procrastinating and actually wrote it, and in the future as people read it and react to it.

Everything we do has effects. We should strive to act in ways that produce good positive effects and create good Karma. Although this can be to some extent selfish, it can also be seen as having positive effects occur world and others making it a better place. The Buddha’s ethical teachings were very simple. If an action results in greater happiness, well-being, and understanding then it is good. On the other hand, an action that causes harm, decreases happiness, well-being, and understanding is bad. Actions are right or wrong, not in and of themselves but based upon their consequences. So, ethics are also wrapped up in Dependent Origination and Karma. The more you look at it the more and more profound the teaching looks.

There is nothing mystical or spiritual in the notions off Dependent Origination or Karma. They are very mechanistic and reflect the physical laws of nature and the universe. It’s seeing things as vastly interconnected, as they really are, and seeing how these interconnections produce multitudinous causal chains that set in motion all that will occur in the future. Understanding these notions can make us wise, compassionate, and the creators of good Karma for the good of ourselves and all sentient beings.

“Karma is experience, and experience creates memory, and memory creates imagination and desire, and desire creates karma again. If I buy a cup of coffee, that’s karma. I now have that memory that might give me the potential desire for having cappuccino, and I walk into Starbucks, and there’s karma all over again.” – Deepak Chopra