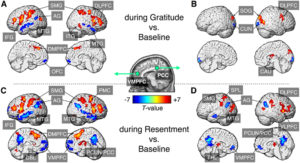 “benefit of meditation. Or, rather, some ancient benefit that is just now being confirmed with fMRI or EEG. The practice appears to have an amazing variety of neurological benefits – from changes in grey matter volume to reduced activity in the “me” centers of the brain to enhanced connectivity between brain regions.” – Alice Walton

There has accumulated a large amount of research demonstrating that meditation has significant benefits for psychological, physical, and spiritual wellbeing. Its positive effects are so widespread that it is difficult to find any other treatment of any kind with such broad beneficial effects on everything from mood and happiness to severe mental and physical illnesses. This raises the question of how meditation could do this. One possibility is that mindfulness practice results in beneficial changes in the nervous system.

The nervous system is a dynamic entity, constantly changing and adapting to the environment. It will change size, activity, and connectivity in response to experience. These changes in the brain are called neuroplasticity. Over the last decade neuroscience has been studying the effects of contemplative practices on the brain and has identified neuroplastic changes in widespread areas. In other words, mindfulness practice appears to mold and change the brain, producing psychological, physical, and spiritual benefits.

In today’s Research News article “Effects of gratitude meditation on neural network functional connectivity and brain-heart coupling.” See summary below or view the full text of the study at: https://www.ncbi.nlm.nih.gov/pmc/articles/PMC5506019/, Kyeong and colleagues recruited meditation-naïve adults. They were measured before testing for depression, competence, relatedness, and autonomy. The participants laid in a brain scanner and were instructed to think deeply in a gratitude condition and a resentment condition while their heart rate was recorded and functional Magnetic Resonance Imaging (f-MRI) was performed. In the gratitude condition the participants were instructed to think about and visualize their mother for 4 minutes and tell her in their mind how much they love and appreciate her. In the resentment condition the participants were instructed to think about and visualize a person who made them angry. The two conditions were presented in counterbalanced order to two randomly assigned groups.

“Being distracted exacts a cost on our well-being, If we become more mindful of our everyday activities, we can learn well-being and become happier.” – Ritchie Davidson