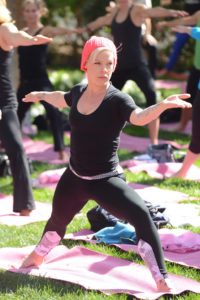 “It was very frightening. You wonder, obviously—Am I going to live through this? I’m convinced that yoga made all the difference in my treatment. The breathing was the thing that always came back for me—keeping the fear and panic down. I was in a PET scan machine for an hour. You just lie there and think terrible thoughts. I found my breathing. That was the most valuable thing.” – Debra Campagna

Surviving cancer, however, carries with it a number of problems. “Physical, emotional, and financial hardships often persist for years after diagnosis and treatment. Cancer survivors are also at greater risk for developing second cancers and other health conditions.” (National Cancer Survivors Day). Also, breast cancer survivors can have to deal with a heightened fear of reoccurrence. This is particularly true with metastatic cancer. Additionally, cancer survivors frequently suffer from anxiety, depression, mood disturbance, Post-Traumatic Stress Disorder (PTSD), sleep disturbance, fatigue, sexual dysfunction, loss of personal control, impaired quality of life, an alteration of their body image, and psychiatric symptoms which have been found to persist even ten years after remission. So, safe and effective treatments for the symptoms in breast cancer and the physical and psychological effects of the treatments are needed.

Mindfulness training has been shown to help with general cancer recovery and breast cancer recovery. Mindfulness helps to alleviate many of the residual physical and psychological symptoms, including stress,  sleep disturbance, and anxiety and depression. Yoga practice has also been shown to be helpful with the residual symptoms and the psychological and physical ability to deal with cancer treatment. So, it’s reasonable to further explore the potential benefits of yoga practice for women during and after treatment.

In today’s Research News article “Effect of Long-term Yoga Practice on Psychological outcomes in Breast Cancer Survivors.” See summary below or view the full text of the study at: https://www.ncbi.nlm.nih.gov/pmc/articles/PMC5545946/, Amritanshu and colleagues recruited breast cancer survivors who were at least 6 months since the completion of treatment. They separated them into groups based upon whether they practiced yoga or not during the last year. The participants were measured for perceived stress, anxiety, depression, sleep quality, general health, and quality of life, including physical, psychological, social, and functional dimensions.

So, improve the mental and physical health of breast cancer survivors with yoga.

“Studies suggest that doing yoga while going through breast cancer treatment helps you get through it with fewer side effects. Often doctors have to stop chemo or lower doses to levels that may not be as effective because people don’t tolerate the side effects. But yoga appears to decrease all kinds of side effects.” – Timothy McCall

Breast cancer has become a pandemic with an ever-increasing incidence. Although better diagnostics and treatment modalities have reduced mortality, a large number of survivors face cancer and treatment-related long-term symptoms. Many survivors are taking up yoga for improving the quality of life (QoL). The present study attempts to evaluate predictors of psychological states in breast cancer survivors with long-term yoga experience.

Results indicate that breast cancer survivors, doing yoga, have better psychological profiles and are able to deal with demanding situations better. The psycho-oncogenic model of cancer etiology suggests that a better psychological state in survival has the potential to improve prognosis and survival outcomes and Yoga may be a suitable practice for staying cancer-free for a longer time.