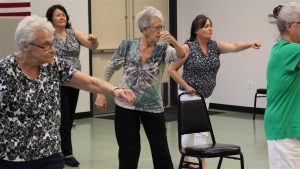 “In addition to the physical components of tai chi, this form of exercise has mental and emotional advantages. Some studies have shown people who perform tai chi on a regular basis see improvements in cognitive function and memory.” – Phillips Lifeline

The aging process involves a systematic progressive decline in every system in the body, the brain included. The elderly often have problems with attention, thinking, and memory abilities, known as mild cognitive impairment. An encouraging new development is that mindfulness practices such as meditation training and mindful movement practices can significantly reduce these declines in cognitive ability. In addition, it has been found that mindfulness practices reduce the deterioration of the brain that occurs with aging restraining the loss of neural tissue. Indeed, the brains of practitioners of meditation,  yoga, and Tai Chi have been found to degenerate less with aging than non-practitioners.

They found that the older the participants the higher the systolic blood pressure but the lower the cerebrovascular blood flow. Importantly, the cerebrovascular hemodynamics of the older Tai Chi practitioners were significantly higher than the age matched controls and the levels approached those of the young adults. Including carotid blood flow velocity, overall elasticity of the arterial wall, and the degree of flow of small blood vessels and capillaries and reduced arterial resistance.

The present study was cross-sectional, comparing older adults who practiced Tai Chi to those who did not. This kind of design doesn’t allow for clear conclusions about causation. But previous research by others using training in Tai Chi demonstrated that it reduced age-related decline. So, it is likely that the benefits observed in the present study were also due to the practice of Tai Chi.

So, reduce age-associated decline in cerebrovascular function with Tai Chi.

Tai Chi exercise has been reported to enhance physical and mental health in the older adults; however, the mechanism remains elusive.

We recruited 289 older adults practicing Tai Chi for over 3 years, together with 277 age-matched older and 102 young adults as controls. 168 Tai Chi practitioners were successfully matched to 168 older controls aged 60–69 based on a propensity score for statistics.

Cerebrovascular function was evaluated by measuring the hemodynamics of the carotid artery. Spearman correlation was performed to validate the age-associated physiological parameters.

These data demonstrate a rejuvenation role of Tai Chi in improving the age-related decline of the cerebrovascular function.