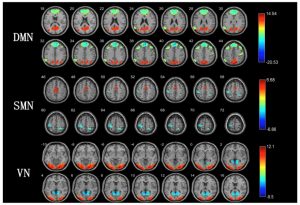 The aging process involves a systematic progressive decline in every system in the body, the brain included. The elderly frequently have problems with attention, thinking, and memory abilities, known as mild cognitive impairment. An encouraging new development is that mindfulness practices such as meditation training and mindful movement practices can significantly reduce these declines in cognitive ability. In addition, it has been found that mindfulness practices reduce the deterioration of the brain that occurs with aging restraining the loss of neural tissue. Indeed, the brains of practitioners of meditation,  yoga, and Tai Chi have been found to degenerate less with aging than non-practitioners.

In today’s Research News article “Differential Effects of Tai Chi Chuan (Motor-Cognitive Training) and Walking on Brain Networks: A Resting-State fMRI Study in Chinese Women Aged 60.” (See summary below or view the full text of the study at: https://www.ncbi.nlm.nih.gov/pmc/articles/PMC7151113/ ) Yue and colleagues recruited older women (over 60 years of age) who were long-term practitioners of Tai Chi or walking and scanned their brains with functional Magnetic Imaging (fMRI).

They examined 3 brain networks, the Default Mode Network, the Sensory Motor Network, and the Visual Network and found significant differences in the functional connectivity within these networks between the Tai Chi and walking groups. This suggests that the two exercises change the brains information processing in these women. They suggest that the brains of the older women went through neuroplastic changes as a result of their practices with different changes in different systems depending on the exercise.

There is evidence that physical fitness reduces the likelihood of dementia and Tai Chi practice has been shown to reduce the likelihood or severity of age-related cognitive decline. The observed changes, particularly in the Default Mode Network, which is known to be associated with memory and thinking, may underlie the effectiveness of these exercises in reducing the incidence of age-related cognitive decline and dementia. It remains for future research to determine which of the observed changes in the brains are responsible for retaining mental ability with aging.

Tai Chi practice is not strenuous, involves slow gentle movements, and is safe, having no appreciable side effects, it is appropriate for all ages including the elderly and for individuals with illnesses that limit their activities or range of motion. It can also be practiced without professional supervision and in groups making it inexpensive to deliver and fun to engage in. This makes Tai Chi practice an excellent means to maintain fitness with aging and help maintain a fit mind and body.

So, Tai Chi practice changes the brain differently than walking.

“Scientists . . . found increases in brain volume and improvements on tests of memory and thinking in Chinese seniors who practiced Tai Chi.” – ScienceDaily

Background: This cross-sectional study aimed to investigate whether a long-term engagement in different types of physical exercise may influence resting-state brain networks differentially. In particular, we studied if there were differences in resting-state functional connectivity measures when comparing older women who are long-term practitioners of tai chi chuan or walking. Method: We recruited 20 older women who regularly practiced tai chi chuan (TCC group), and 22 older women who walked regularly (walking group). Both the TCC group and the walking group underwent a resting-state functional magnetic resonance imaging (rs-fMRI) scan. The acquired rs-fMRI data of all participants were analyzed using independent component analysis. Age and years of education were added as co-variables. Results: There were significant differences in default network, sensory-motor network, and visual network of rs-fMRI between the TCC group and walking group (p < 0.05). Conclusions: The findings of the current study suggested that long-term practice of different types of physical exercises (TCC vs. walking) influenced brain functional networks and brain functional plasticity of elderly women differentially. Our findings encourage further research to investigate whether those differences in resting-state functional connectivity as a function of the type of physical exercise have implications for the prevention of neurological diseases.