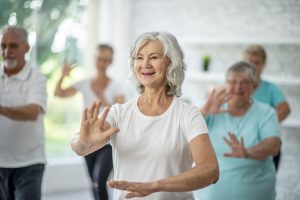 “studies have shown tai chi’s association with improved cognition and neuroplasticity. This has led the scientific community to suggest tai chi may be of useful treating physical and psychological disorders, including stroke, Parkinson’s disease, traumatic brain injury, and depression.” – Sara Alvarado

The aging process involves a systematic progressive decline in every system in the body, the brain included. The elderly frequently have problems with attention, thinking, and memory abilities, known as mild cognitive impairment. An encouraging new development is that mindfulness practices such as meditation training and mindful movement practices can significantly reduce these declines in cognitive ability. In addition, it has been found that mindfulness practices reduce the deterioration of the brain that occurs with aging restraining the loss of neural tissue. Indeed, the brains of practitioners of meditation,  yoga, and Tai Chi have been found to degenerate less with aging than non-practitioners.

In today’s Research News article “Tai Chi Training Evokes Significant Changes in Brain White Matter Network in Older Women.” (See summary below or view the full text of the study at: https://www.ncbi.nlm.nih.gov/pmc/articles/PMC7151065/) Yue and colleagues recruited elderly women (average age of 63 years) and who had been routinely performing (90 minutes at least 5 times per week for at least 6 years in groups) either Tai Chi or daily walking. They were measured for mental ability, working memory, and cognitive ability. In addition, their brains were scanned with Diffusion Tensor Imaging (DTI).

They found that in comparison to the walking group, the brains of the Tai Chi group had a greater volume of white matter indicating that their brains could transfer information effectively both locally and globally. They also found that the Tai Chi group had significantly better working memory performance than the walking group and that greater the volume of white matter in their brains the better their working memories. This was true for both working memory speed and accuracy.

A strength of the present study is that there was an active control group, walking, that was, like Tai Chi, performed in a group and was a moderate exercise. So, the results can be interpreted as due to the performance of Tai Chi itself and not to nonspecific factors such as socialization and exercise. The weaknesses in the study included the fact that only women were studied, there was no random assignment to groups, and that there was no manipulation of Tai Chi or walking practice. The participants self-selected which exercise to participate in. This opens up the possibility that there may have been systematic differences between the groups.

The results suggest that routine Tai Chi practice improves the brain’s ability to transfer information around the nervous system in elderly women. This may protect that individuals from the inevitable deterioration of the brain with aging and its associated decline in cognitive ability. The relationship between white matter and working memory is evidence for that protection against cognitive decline. These results support previous findings that mindfulness practices can protect the individual from age related brain deterioration and cognitive decline.

So, increase white matter in the brains of aging women with Tai Chi.

“A comparison of the effects of regular sessions of tai chi, walking, and social discussion, has found tai chi was associated with the biggest gains in brain volume and improved cognition.” – About Memory

Background: Cognitive decline is age relevant and it can start as early as middle age. The decline becomes more obvious among older adults, which is highly associated with increased risk of developing dementia (e.g., Alzheimer’s disease). White matter damage was found to be related to cognitive decline through aging. The purpose of the current study was to compare the effects of Tai Chi (TC) versus walking on the brain white matter network among Chinese elderly women. Methods: A cross-sectional study was conducted where 42 healthy elderly women were included. Tai Chi practitioners (20 females, average age: 62.9 ± 2.38 years, education level 9.05 ± 1.8 years) and the matched walking participants (22 females, average age: 63.27 ± 3.58 years, educational level: 8.86 ± 2.74 years) underwent resting-state functional magnetic resonance imaging (rsfMRI) scans. Diffusion tensor imaging (DTI) and graph theory were employed to study the data, construct the white matter matrix, and compare the brain network attributes between the two groups. Results: Results from graph-based analyses showed that the small-world attributes were higher for the TC group than for the walking group (p < 0.05, Cohen’s d = 1.534). Some effects were significant (p < 0.001) with very large effect sizes. Meanwhile, the aggregation coefficient and local efficiency attributes were also higher for the TC group than for the walking group (p > 0.05). However, no significant difference was found between the two groups in node attributes and edge analysis. Conclusion: Regular TC training is more conducive to optimize the brain functioning and networking of the elderly. The results of the current study help to identify the mechanisms underlying the cognitive protective effects of TC.