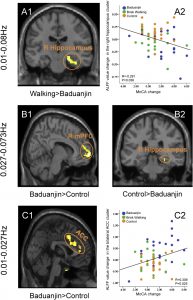 “in individuals age 60 or older with mild cognitive impairment . . . engaging in tai chi (a series of gentle, slow movements accompanied by deep breathing) reduces the risk of falling. What’s more, it may also improve cognitive abilities.” – Health and Wellness Alerts

The aging process involves a systematic progressive decline in every system in the body, the brain included. The elderly frequently have problems with attention, thinking, and memory, known as mild cognitive impairment. An encouraging new development is that mindfulness practices such as meditation training and mindful movement practices can significantly reduce these declines in cognitive ability. In addition, it has been found that mindfulness practices reduce the deterioration of the brain that occurs with aging restraining the loss of neural tissue. Indeed, the brains of practitioners of meditation,  yoga, and Tai Chi have been found to degenerate less with aging than non-practitioners.

Tai Chi has been practiced for thousands of years with benefits for health and longevity. Tai Chi training is designed to enhance function and regulate the activities of the body through regulated breathing, mindful concentration, and gentle movements. Tai Chi practice has been found to be effective for an array of physical and psychological issues. Tai Chi has been shown to help the elderly improve attention, balance, reducing falls, arthritis, cognitive function, memory, and reduce age related deterioration of the brain. So, it makes sense to further study the effectiveness of Tai Chi training on older adults with mild cognitive impairment to improve their cognitive performance.

In today’s Research News article “Mind-body exercise improves cognitive function and modulates the function and structure of the hippocampus and anterior cingulate cortex in patients with mild cognitive impairment.” (See summary below or view the full text of the study at: https://www.ncbi.nlm.nih.gov/pmc/articles/PMC6535682/), Tao and colleagues recruited sedentary patients over 60 years of age who were diagnosed with mild cognitive impairment. They were randomly assigned to receive 24 weeks, 3 times per week for 1 hour, of either Baduanjin Tai Chi or brisk walking, or 8 weeks, once a week for 30 minutes of health education. They were measured before and after the 24 weeks of training for cognitive function including naming, verbal memory registration, visuospatial/executive functions, and learning, attention, and abstraction. Their brains were also scanned with functional Magnetic Resonance Imaging (fMRI) before and after training.

The hippocampus has been shown to be involved in information storage (memory). Since one of the biggest changes that accompany mild cognitive impairments are deficits in memory, it seems logical that interventions that improve cognitive function in these patients would affect the brain structure involved in the memory process.

It’s important to note that Tai Chi is gentle and safe, appropriate for all ages, and for individuals with illnesses that limit their activities or range of motion. It is inexpensive to administer, can be performed in groups or alone, at home or in a facility, and can be quickly learned. In addition, it can be practiced in social groups. This can make it fun, improving the likelihood of long-term engagement in the practice. Overall, the results suggest that participation in Tai Chi should be recommended for patients with mild cognitive impairments.

So, improve brain function and mild cognitive impairment in the elderly with Tai Chi

This and other Contemplative Studies posts also available on Google+ https://plus.google.com/106784388191201299496/posts and on Twitter @MindfulResearch