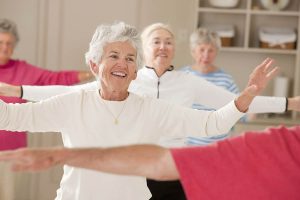 Dementia is a progressive loss of mental function produced by degenerative diseases of the brain. These are progressive disorders with no cures. Alzheimer’s disease is the most common form of dementia. It is estimated that 5 million Americans have Alzheimer’s disease. It involves an irreversible progressive loss of mental function associated with brain degeneration. The early stages are typified by memory loss but as the disease progresses patients can lose the ability to carry on a conversation or carry on normal life functions, and eventually leads to death. In fact, Alzheimer’s disease is the sixth leading cause of death in the U.S. On average, this progression lasts about 8 years but can last as long as 20 years.

Mindfulness training has been found to help protect aging individuals from physical and cognitive declines. Tai Chi has been practiced for thousands of years with benefits for health and longevity. Tai Chi training is designed to enhance function and regulate the activities of the body through regulated breathing, mindful concentration, and gentle movements. Tai Chi practice has been found to be effective for an array of physical and psychological issues. Tai Chi has been shown to help the elderly improve attention, balance, reducing falls, arthritis, cognitive function, memory, and reduce age related deterioration of the brain.

In today’s Research News article “The effectiveness of Tai Chi for short-term cognitive function improvement in the early stages of dementia in the elderly: a systematic literature review.” (See summary below or view the full text of the study at: https://www.ncbi.nlm.nih.gov/pmc/articles/PMC6512568/), Lim and colleagues reviewed and summarized the published research literature examining the effectiveness of Tai Chi practice for the treatment of  cognitive problems in patients in the early stages of dementia. They identified 9 published research studies.

There were differing results in different studies that varied in rigor, but in general, the studies reported that Tai Chi practice resulted in improved cognitive function, working memory, verbal learning and memory, fewer complaints about memory loss, semantic memory, and visuospatial ability. Hence, the review concluded that Tai Chi practice produces small but clinically significant improvements in cognitive functions and memory in patients in the early stages of dementia.

These are potentially important findings as there is no cure for dementia and deterioration is inevitable. Slowing the progression of the disease is the only current hope there is for the patients. Tai Chi practice appears to be a safe and effective method to slow down the inevitable cognitive decline in dementia patients.

Tai Chi is not strenuous, involving slow gentle movements, and is safe, having no appreciable side effects, it is appropriate for all ages including the elderly and for individuals with illnesses that limit their activities or range of motion. It can also be practiced without professional supervision and in groups making it inexpensive to deliver and fun to engage in. This makes Tai Chi practice an excellent means to treat patients in the early stages of dementia, slowing the progression of the disease.

“Those with the best balance and walking abilities at the start of the study were three times less likely to have developed dementia as those with lower physical abilities. The good news is that practicing can dramatically improve your balance within months or even weeks.”

Purpose: This systematic review examines intervention studies using Tai Chi in the early stages of dementia to determine the effectiveness of Tai Chi for the short-term improvement of cognitive functions for elderly persons with the disease.

Methods: A keyword search was done in PubMed/MEDLINE, Cumulative Index to Nursing and Allied Health Literature (CINAHL), Excerpta Medica Database (EMBASE), and Cochrane Library databases using keywords such as Tai Chi, Dementia*, and cognition. A secondary search strategy consisting of a manual search in the reference lists of selected articles was also used.

Results: A total of nine studies were reviewed including six randomized controlled trials, two non-randomized controlled trials, and one non-randomized prospective study. The studies suggest Tai Chi has impacts on global cognitive functions, visuospatial skills, semantic memory, verbal learning/memory, and self-perception of memory. The effects of Tai Chi on overall cognition for people with mild cognitive impairment are comparable to those in control groups which engaged in exercise.

Conclusion: The studies reviewed affirm the potential of Tai Chi to improve short-term cognitive function in the elderly at the onset of dementia.