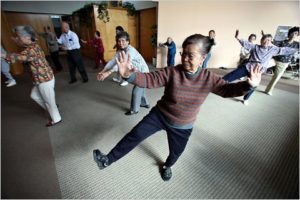 Improve Cognition in the Elderly with Tai Chi

The aging process involves a systematic progressive decline of the body and the brain. Every system in the body deteriorates including cognitive function (thinking ability) and motor function with a decline in strength, flexibility, and balance. It is inevitable. In addition, many elderly experience withdrawal and isolation from social interactions. There is some hope as there is evidence that these declines can be slowed. For example, a healthy diet and a regular program of exercise can slow the physical and cognitive decline of the body with aging. Also, contemplative practices such as meditation, yoga, and tai chi or qigong have all been shown to be beneficial in slowing or delaying physical and mental decline.

Tai Chi has been practiced for thousands of years with benefits for health and longevity. Tai Chi training is designed to enhance function and regulate the activities of the body through regulated breathing, mindful concentration, and gentle movements. Only recently though have the effects of Tai Chi practice been scrutinized with empirical research. But, it has been found to be effective for an array of physical and psychological issues. Tai Chi has been shown to help the elderly improve attention, balance, reducing falls, arthritis, cognitive function, memory, and reduce age related deterioration of the brain. Because Tai Chi is not strenuous, involving slow gentle movements, and is safe, having no appreciable side effects, it is appropriate for all ages including the elderly and for individuals with illnesses that limit their activities or range of motion.

In today’s Research News article “Effects of tai chi on cognition and instrumental activities of daily living in community dwelling older people with mild cognitive impairment.” (See summary below or view the full text of the study at: https://www.ncbi.nlm.nih.gov/pmc/articles/PMC5797349/ ), Siu and Lee examine the effectiveness of Tai Chi practice for elderly individuals with mild cognitive impairment. They recruited elderly individuals (> 60 years of age) with mild cognitive impairment from 4 community centers for the elderly. Participants from two community centers were randomly assigned to a no-treatment control condition or to receive 16 weeks of Tai Chi training for 1-hour twice a week. They were measured before and after training for cognitive ability and daily living activities; including using telephone, shopping, preparing food, doing house-keeping and laundry, using transportation, managing finances, handling medication, and doing handyman work.

They found that the Tai Chi practice group compared to baseline and the control group had significant improvements in cognitive ability and in the performance of daily activities. These are important findings. With an aging population, the maintenance of ability to perform daily activities may reduce the burden and cost of caregivering. In addition, the improvements in cognitive function may reduce the incidence of dementia and allow for better quality of life in the elderly. Importantly, these benefits can be produced with a convenient, inexpensive, safe, and fun social activity.

So, improve cognition in the Elderly with Tai Chi.

“A comparison of the effects of regular sessions of tai chi, walking, and social discussion, has found tai chi was associated with the biggest gains in brain volume and improved cognition.” – Fiona MsPherson

Cognitive impairment places older adults at high risk of functional disability in their daily-life activities, and thus affecting their quality of life. This study aimed to examine the effects of Tai Chi on general cognitive functions and instrumental activities of daily living (IADL) in community-dwelling older people with mild cognitive impairment (MCI) in Hong Kong.

The study adopted a multi-site nonequivalent control-group pretest-posttest design. 160 community-dwelling older people, aged ≥60, with MCI, from four community elderly centers participated in the study. The intervention group (IG, n = 80) received training in the Yang-style simple form of Tai Chi, at a frequency of two lessons per week for 16 weeks. Each lesson lasted for one hour. The control group (CG, n = 80) had no treatment regime and joined different recreational activity groups in community centers as usual within the study period. Outcome measures included measures of global cognitive status and IADL. The Chinese version of the Mini-Mental State Examination (CMMSE) was used for global cognitive assessment. The Hong Kong Chinese version of Lawton’s Instrumental Activities of Daily Living (IADL-CV) was used to assess the participants’ IADL levels. General Estimating Equations (GEE) was used to examine each of the outcome variables for the two groups at the two study time points (the baseline and at the end of the study). Meanwhile, minimum detectable change (MDC) was calculated to estimate the magnitude of changes required to eradicate the possibility of measurement error of outcome measures.

Seventy four participants in the IG and 71 participants in the CG completed the study. With adjustments for differences in age, education, marital status and living conditions, the findings revealed that the participants in the IG scored significantly better on the CMMSE test (P = 0.001), and the instrumental ADL questionnaire (P = 0.004). However, those scores changes did not exceed the limits of the respective MDCs in the study, the possibility of measurement variation due to error could not be excluded.

Tai Chi may be an effective strategy to enhance cognitive health and maintain functional abilities in instrumental ADL in older people with MCI.