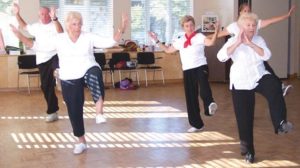 Improve Well-Being in the Elderly with Tai Chi

“Practising the ancient martial art of Tai Chi is so beneficial to elderly people’s health that it should be “the preferred mode of training”, according to scientists.” – The Telegraph

We celebrate the increasing longevity of the population. But, aging is a mixed blessing. The aging process involves a systematic progressive decline of the body and the brain. Every system in the body deteriorates including motor function with a decline in strength, flexibility, and balance. It is inevitable. In addition, many elderly experience withdrawal and isolation from social interactions. There is some hope as there is evidence that these declines can be slowed. For example, a healthy diet and a regular program of exercise can slow the physical decline of the body with aging. Also, contemplative practices such as meditation, yoga, and tai chi or qigong have all been shown to be beneficial in slowing or delaying physical and mental decline.

Tai Chi has been practiced for thousands of years with benefits for health and longevity. Tai Chi training is designed to enhance function and regulate the activities of the body through regulated breathing, mindful concentration, and gentle movements. Only recently though have the effects of Tai Chi practice been scrutinized with empirical research. But, it has been found to be effective for an array of physical and psychological issues. It appears to strengthen the immune system, reduce inflammation and increase the number of cancer killing cells in the bloodstream. Because Tai Chi is not strenuous, involving slow gentle movements, and is safe, having no appreciable side effects, it is appropriate for all ages including the elderly and for individuals with illnesses that limit their activities or range of motion. Tai Chi has been shown to help the elderly improve attention, balance, reducing falls, arthritis, cognitive function, memory, and reduce age related deterioration of the brain.

In today’s Research News article “Effects of tai chi qigong on psychosocial well-being among hidden elderly, using elderly neighborhood volunteer approach: a pilot randomized controlled trial.” See summary below or view the full text of the study at: https://www.ncbi.nlm.nih.gov/pmc/articles/PMC5221552/, Chan and colleagues recruited “hidden elderly” participants, who were over 60 years of age and did not participate in any social activities. They were randomly assigned to either a control condition which received usual care or to receive Tai Chi practice for 60 minutes, twice a week for 3 months and were encouraged to practice at home for 30 minutes daily. They were measured before and after the 3-month practice period and 3 months later for their social network, social support, loneliness, mental health, self-esteem, and health quality of life.

They found compared to baseline and the control group that the group that practiced Tai Chi had significant improvements in loneliness, social support, and their physical quality of life that persisted for the three month follow-up period. There were no adverse events and the participants indicated that they were pleased with the practice. Hence, practicing Tai Chi was safe, acceptable, and effective; significantly improving the social, psychological, and physical conditions of the “hidden elderly.”

Regardless of whether Tai Chi was responsible or not, getting the “hidden elderly” out of their isolated situation and engaging in social activities is important for their psychological and physical well-being. Tai Chi is safe and acceptable for the elderly, is a light exercise, can be practiced virtually anywhere at little of no cost, and promotes social engagement. So, it would seem to be an almost ideal vehicle to promote the well-being of the elderly.

So, improve well-being in the elderly with Tai Chi.

To test the feasibility and preliminary effectiveness of a tai chi qigong program with the assistance of elderly neighborhood volunteers in strengthening social networks and enhancing the psychosocial well-being of hidden elderly.

“Hidden elderly” is a term used to describe older adults who are socially isolated and refuse social participation. This pilot randomized controlled trial recruited 48 older adults aged 60 or above who did not engage in any social activity. They were randomized into tai chi qigong (n=24) and standard care control (n=24) groups. The former group underwent a three-month program of two 60-minute sessions each week, with the socially active volunteers paired up with them during practice. Standard care included regular home visits by social workers. Primary outcomes were assessed by means of the Lubben social network and De Jong Gieveld loneliness scales, and by a revised social support questionnaire. Secondary outcomes were covered by a mental health inventory and the Rosenberg self-esteem scale, and quality of life by using the 12-Item Short Form Health Survey. Data was collected at baseline, and at three and six months thereafter.

The generalized estimating equations model revealed general improvement in outcomes among participants on the tai chi qigong program. In particular, participants reported a significantly greater improvement on the loneliness scale (B=−1.32, 95% confidence interval [CI] −2.54 to −0.11, P=0.033) and the satisfaction component of the social support questionnaire (B=3.43, 95% CI 0.10–6.76, P=0.044) than the control group.

The pilot study confirmed that tai chi qigong with elderly neighborhood volunteers is a safe and feasible social intervention for hidden elderly. Its potential benefits in improving social and psychological health suggest the need for a full-scale randomized controlled trial to reveal its empirical effects.