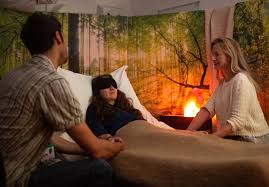 Psychedelic Drug Treatments have Little or No Adverse Side Effects

“Flashbacks and psychosis can happen to anyone, but research has shown that they are more often observed in patients with a history of psychological problems.” – Buddy T

have been used almost since the beginning of recorded history to alter consciousness and produce spiritually meaningful experiences. More recently hallucinogenic drugs such as MDMA (Ecstasy) and Ketamine have been similarly used. People find the experiences produced by these substances extremely pleasant. eye opening, and even transformative. They often report that the experiences changed them forever. Psychedelics and hallucinogens have also been found to be clinically useful as they markedly improve mood, increase energy and enthusiasm and greatly improve clinical depression.

Even though the effects of psychedelic substances have been experienced and reported on for centuries, only very recently have these effects come under rigorous scientific scrutiny. There are anecdotes of dangerous side effects produced by psychedelic drugs. There has been a number of research studies of adverse events associated with psychedelic drugs. It makes sense to summarize what has been learned.

In today’s Research News article “Adverse effects of psychedelics: From anecdotes and misinformation to systematic science.” (See summary below or view the full text of the study at: https://www.ncbi.nlm.nih.gov/pmc/articles/PMC8905125/ ) Schlag and colleagues review and summarize the published research studies regarding adverse events associated with psychedelic drugs including LSD, psilocybin, mescaline, DMT, and ayahuasca.

They report that there are few, if any, psychological risks associated with the use of psychedelic drugs mainly emanating from the challenging nature of the experiences. There is little evidence of psychosis of persistent hallucinations. They also report that the physiological safety of psychedelic drugs is well established and in fact they have been described as ‘one of the safest known classes of CNS drugs.’

‘One significant, but rare, consequence of chronic use of psychedelic drugs is the development of a disorder known as hallucinogen-induced persistent perception disorder. This disorder occurs when individuals who no longer use these drugs experience flashbacks weeks, months, or even years after their last use.” –  American Addiction Centers

Despite an increasing body of research highlighting their efficacy to treat a broad range of medical conditions, psychedelic drugs remain a controversial issue among the public and politicians, tainted by previous stigmatisation and perceptions of risk and danger.

This narrative review examines the evidence for potential harms of the classic psychedelics by separating anecdotes and misinformation from systematic research.

Taking a high-level perspective, we address both psychological and psychiatric risks, such as abuse liability and potential for dependence, as well as medical harms, including toxicity and overdose. We explore the evidence base for these adverse effects to elucidate which of these harms are based largely on anecdotes versus those that stand up to current scientific scrutiny.

Our review shows that medical risks are often minimal, and that many – albeit not all – of the persistent negative perceptions of psychological risks are unsupported by the currently available scientific evidence, with the majority of reported adverse effects not being observed in a regulated and/or medical context.

This highlights the importance for clinicians and therapists to keep to the highest safety and ethical standards. It is imperative not to be overzealous and to ensure balanced media reporting to avoid future controversies, so that much needed research can continue.