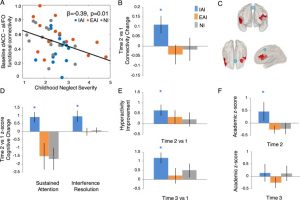 “Without appropriate clinical interventions, individuals exposed to relational trauma in childhood are at greater risk for difficulties in adult relationships and parenting.” At present, there is not much in the way of treatment for individual adults who have experienced childhood maltreatment: this study shows that mindfulness could help change that.” – Emily Nauman

“Child maltreatment is the abuse and neglect that occurs to children under 18 years of age. It includes all types of physical and/or emotional ill-treatment, sexual abuse, neglect, negligence and commercial or other exploitation, which results in actual or potential harm to the child’s health, survival, development or dignity in the context of a relationship of responsibility, trust or power.” (World Health Organization, 2016)

Childhood neglect is traumatic and can leave in its wake symptoms which can haunt the victims for the rest of their lives. These include cognitive impairments such as attentional difficulties, difficulty concentrating, and hyperactivity. Unfortunately, childhood neglect can continue to affect mental and physical health throughout the individual’s life. Fortunately, mindfulness training has been found to help. Indeed, mindfulness has been found to be effective for relieving trauma symptoms even in adults who were maltreated in childhood..

In today’s Research News article “Closed-loop digital meditation for neurocognitive and behavioral development in adolescents with childhood neglect.” (See summary below or view the full text of the study at: https://www.ncbi.nlm.nih.gov/pmc/articles/PMC7235252/) Mishra and colleagues recruited adolescents (aged 10-18 years) who had experienced childhood neglect. They were randomly assigned to either a no-treatment control condition or to receive over the internet 30 sessions over 6 weeks of 30 minutes of either breath following meditation or attention to sensory information video games. They were measured before and after training and one year later for sustained attention, attention with distractors, inattention behaviors, hyperactivity, and academic performance. They also had their brains scanned with Resting-state functional magnetic resonance imaging (rs-fMRI).

They found that in comparison to baseline and the no-treatment and the attention to sensory information groups, the breath following meditation group after treatment had significant increases in attentional ability, both sustained and with distractors and a significant improvement in academic performance. In addition, the breath following meditation groups had a significant decrease in hyperactivity at the 1-year follow-up. The resting-state functional magnetic resonance imaging (rs-fMRI) revealed that the greater the level of childhood neglect experienced by the adolescents the lower the functional connectivity of the dorsal anterior cingulate cortex. After treatment only the breath following meditation group had a significant increase in the functional connectivity of the dorsal anterior cingulate cortex and the greater the increase in connectivity the greater the improvements in sustained attention and hyperactivity.

These are interesting and potentially important findings. Childhood neglect appears to result in impairments in the connectivity of a key brain area involved in regulating attention, the dorsal anterior cingulate cortex. This could explain why neglected children have a higher likelihood of developing attention deficit hyperactivity (ADHD) disorder in adolescents. Importantly, training in breath following meditation appears to some extent reverse the loss of functional connectivity and the attentional and hyperactivity symptoms of the adolescents and result in improved performance in school. Hence, training in breath following meditation may be very helpful in preventing childhood neglect from producing ADHD in adolescents and impairing their academic performance.

Another important aspect of the present study was that the treatment was provided over the internet. This greatly increases its availability, convenience, and utility and reduces cost. So, the treatment can be cost effectively scaled up to treat large numbers of adolescents scattered over wide geographic regions. This makes it available to adolescents who are neither near a therapist or can afford therapy.

Hence, meditate to alter the brain and overcome attention and hyperactivity problems resulting from childhood neglect.

“The absence of emotional support in childhood can be as damaging and long-lasting as other traumas. But, because you can’t point to exactly where and when the wounding happened, it can be hard to identify and overcome it.” – Andrea Brandt

Adverse childhood experiences are linked to poor attentive behaviors during adolescence, as well as increased risk for mental health disorders in adults. However, no study has yet tested targeted interventions to optimize neurocognitive processes in this population. Here, we investigated closed-loop digital interventions in a double-blind randomized controlled study in adolescents with childhood neglect, and evaluated the outcomes using multimodal assessments of neuroimaging, cognitive, behavioral, and academic evaluations. In the primary neuroimaging results, we demonstrate that a closed-loop digital meditation intervention can strengthen functional connectivity of the dorsal anterior cingulate cortex (dACC) in the cingulo-opercular network, which is critically developing during the adolescent period. Second, this intervention enhanced sustained attention and interference-resolution abilities, and also reduced behavioral hyperactivity at a 1-year follow-up. Superior academic performance was additionally observed in adolescents who underwent the digital meditation intervention. Finally, changes in dACC functional connectivity significantly correlated with improvements in sustained attention, hyperactivity, and academic performance. This first study demonstrates that closed-loop digital meditation practice can facilitate development of important aspects of neurocognition and real-life behaviors in adolescents with early childhood neglect.