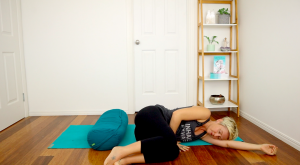 Reduce Depression After Stillbirth with Yoga

“Bereaved mothers with stillbirth (death at >20 weeks of gestation) have more than a 6-fold higher risk for Post Traumatic Stress Disorder (PTSD) compared to mothers after live birth. . . . Non-pharmacological approaches, such as yoga, may be an alternative option for bereaved women with stillbirth.” – Jennifer Huberty

Experiencing trauma is quite common. It has been estimated that 60% of men and 50% of women will experience a significant traumatic event during their lifetime with 7%-8% of the population developing Post-Traumatic Stress Disorder (PTSD). It involves a number of troubling symptoms including reliving the event with the same fear and horror in nightmares or with a flashback.

Having a stillbirth is a traumatic event for young women. It inevitably produces profound depression, grief, and symptoms of PTSD. Obviously, this is a troubling problem that needs to be addressed. There are a number of therapies that have been developed to treat depression, grief and  PTSD. One of which, mindfulness training has been found to be particularly effective for depression, PTSD symptoms, and grief.  Yoga practice has also been found to reduce depression and PTSD symptoms. There is, however, no studies to date on the effectiveness of yoga practice to help alleviate the trauma produced by stillbirth.

In today’s Research News article “Online yoga to reduce post traumatic stress in women who have experienced stillbirth: a randomized control feasibility trial.” (See summary below or view the full text of the study at: https://www.ncbi.nlm.nih.gov/pmc/articles/PMC7275350/) Huberty and colleagues recruited women who had experienced stillbirth within the last 2 years and randomly assigned them to receive 12 weeks of either low dose Hatha yoga (60 minutes per week), moderate dose Hatha yoga (150 minutes per week), or stretching and toning practice (60 minutes per week). All practice was led by online videos. They were measured before and after training and 8 weeks later for acceptability and demand for the program, PTSD symptoms, anxiety, depression, grief, self-compassion, emotion regulation, mindfulness, and sleep quality.

They found that PTSD symptoms decreased significantly over the measurement period with a 43% and 56% decrease for the low and moderate yoga groups and a 22% decrease for the stretching and toning group. But there were no significant differences between groups. On the other hand, in comparison to the stretching and toning group, both of the yoga groups had significant decreases in depression and grief. Unfortunately, the low dose yoga group only practiced on the average for 44 minutes per week and the high dose yoga only practiced for 77 minutes per week. This was well below the desired amount of practice.

The lack of a significant difference between the yoga and control groups was disappointing. Previous research has demonstrated that yoga practice reduces PTSD symptoms. It is possible that attempting to teach yoga remotely, online, to participants who are depressed simply may not be an effective way to encourage practice. Depressed patients lack motivation and it is possible that they need the encouragement of a group and an instructor to motivate their participation. Future research should employ traditional in person yoga classes for the treatment of women who had stillbirths.

Nevertheless, the yoga practice, even though it was below the dose desired, did significantly reduce depression. This corroborates previous findings that yoga practice is effective in treating a variety of forms of depression and suggests that it is also effective in treating depression emanating from stillbirth. Perhaps in person yoga classes may potentiate the effects on PTSD and other symptoms in women who had stillbirths.

So, reduce depression after stillbirth with yoga.

About 1 in every 150 pregnancies end in stillbirth. Consequences include symptoms of post traumatic stress disorder (PTSD), depression, and anxiety. Yoga has been used to treat PTSD in other populations and may improve health outcomes for stillbirth mothers. The purpose of this study was to determine: (a) feasibility of a 12-week home-based, online yoga intervention with varying doses; (b) acceptability of a “stretch and tone” control group; and (c) preliminary efficacy of the intervention on reducing symptoms of PTSD, anxiety, depression, perinatal grief, self-compassion, emotional regulation, mindfulness, sleep quality, and subjective health.

Over half of participants completed the intervention (n = 48/90). Benchmarks (≥70% reported > 75% satisfaction) were met in each group for satisfaction and enjoyment. Participants meeting benchmarks (completing > 90% of prescribed minutes 9/12 weeks) for LD and MD groups were 44% (n = 8/18) and 6% (n = 1/16), respectively. LD and MD groups averaged 44.0 and 77.3 min per week of yoga, respectively. The MD group reported that 150 prescribed minutes per week of yoga was too much. There were significant decreases in PTSD and depression, and improvements in self-rated health at post-intervention for both intervention groups. There was a significant difference in depression scores (p = .036) and grief intensity (p = .009) between the MD and STC groups. PTSD showed non-significant decreases of 43% and 56% at post-intervention in LD and MD groups, respectively (22% decrease in control).

This was the first study to determine the feasibility and preliminary efficacy of an online yoga intervention for women after stillbirth. Future research warrants a randomized controlled trial.