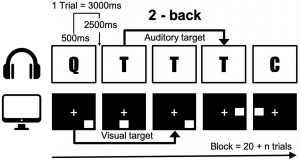 “Mindfulness meditation causes structural changes in the brain. It actually alters connections between brain cells. That is how adults end up with an enlarged cortex. And that may explain why meditation improved memory in the teens.” – Alison Pearce Stevens

Humans have both an amazing capacity to remember and a tremendously limited capacity depending upon which phase of the memory process. Our long-term store of information is virtually unlimited. On the other hand, short-term memory is extremely limited. This is called our working memory and it can contain only about 5 to 9 pieces of information at a time. This fact of a limited working memory store shapes a great deal about how we think, summarize, and categorize our world.

In today’s Research News article “Meditative Movement Affects Working Memory Related to Neural Activity in Adolescents: A Randomized Controlled Trial.” (See summary below or view the full text of the study at: https://www.frontiersin.org/articles/10.3389/fpsyg.2020.00931/full?utm_source=F-AAE&utm_medium=EMLF&utm_campaign=MRK_1332835_69_Psycho_20200519_arts_A), Kang and colleagues recruited healthy adolescents, aged 17-18 years, who were naïve to meditative or mindful movement practices. They were randomly assigned to either a relaxation control condition or to receive training in meditative movement. Relaxation and meditative movements were practiced for 9 minutes twice a day for 3 weeks.

Before and after training they were measured for working memory while simultaneously having their electroencephalogram (EEG) recorded. They were presented with a sequence of audio and visual targets and had to recall the target presented a number of positions back in the series, the further back they could successfully go, the better the working memory.

They found that in comparison to baseline and the relaxation group, the group that performed meditative movements had a significantly greater improvement in working memory, being able to recall targets further back in the sequence. They also found for the meditative movement group but not the relaxation group that the better the working memory score the lower the power of the high beta frequency (30-40 hz. Waves per second) in the EEG over the dorsolateral prefrontal cortex.

The study did not have a follow-up beyond the time immediately after the 3-week training period. It would be important in future research to investigate the duration of the effect by having follow-up measurements at delayed intervals. Also, the control condition in the present study was sedentary while the meditative movement training was active. It would be important for future research to include an active control perhaps performing a non-meditative exercise.

Regardless, the study demonstrates that improved working memory results from meditative movement practice in adolescents as has previously been found for adults. The improvement in working memory is important particularly for adolescents who are in a very active learning period of their lives. Working memory is the foundation for all memory and as such improvement would be important for their academic learning. It remains to be seen if meditative movement improves scholastic performance.

So, improve working memory in adolescents with mindful movement.

“A critical part of attention (and working memory capacity) is being able to ignore distraction. There has been growing evidence that meditation training (in particular mindfulness meditation) helps develop attentional control.” – About Memory