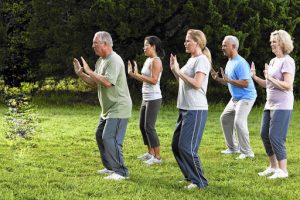 Improve Cognition and Balance in Older Adults with Tai Chi

“Tai chi combines the physical components needed to stay upright—leg strength, flexibility, range of motion, and reflexes—all of which tend to decline with age. . . “It’s like practicing tightrope walking on the ground. You’re practicing your balance and you’re teaching your body to be more sensitive and have greater strength.” – Stanwood Chang

The process of aging affects every aspect of the physical and cognitive domains. Every system in the body deteriorates including motor function with a decline in strength, flexibility, and balance. Impaired balance is a particular problem as it can lead to falls. In the U.S. one third of people over 65 fall each year and 2.5 million are treated in emergency rooms for injuries produced by falls. About 1% of falls result in deaths making it the leading cause of death due to injury among the elderly. It is obviously important to discover methods to improve balance and decrease the number of falls in older adults.

In today’s Research News article “Correlation Between Cognition and Balance Among Middle-Aged and Older Adults Observed Through a Tai Chi Intervention Program.” (See summary below or view the full text of the study at: https://www.frontiersin.org/articles/10.3389/fpsyg.2020.00668/full?utm_source=F-AAE&utm_medium=EMLF&utm_campaign=MRK_1302118_69_Psycho_20200416_arts_A), Xiao and colleagues recruited middle age and older health adults (average age of 59 years). They received Tai Chi training for 1 hour, 3 days per week, for 12 weeks. They were measured before and after training for global cognitive function, static and dynamic balance, body size, lower limb strength, and aerobic endurance.

They found in comparison to baseline after Tai Chi training there were significant increases in global cognitive function, and static and dynamic balance. Also, they found that before training the higher the levels of both dynamic and static balance the higher the levels of cognitive function. In addition, they found that the greater the increase in both static and dynamic balance after Tai Chi training, the greater the increase in cognitive function. These improvements were found to be related to increases in lower limb strength.

These results are interesting as both balance and cognition decline with age. Tai Chi training has been shown in prior research to reduce the decline in both with aging. To my knowledge this is the first time that these improvements appear to be linked where improvements in balance co-occur with improvements in balance. These results suggest that Tai Chi training in older adults may delay cognitive decline and also delay decline in balance. This may tend to reduce the likelihood of falls and precipitous loss of cognitive ability.

These findings support the use of Tai Chito improve balance and cognition in older adults. Some advantages of Tai Chi include the facts that it is not strenuous, involves slow gentle movements, and is safe, having no appreciable side effects, it is appropriate for all ages including the elderly and for individuals with illnesses that limit their activities or range of motion. It can also be practiced without professional supervision and in groups making it inexpensive to deliver and fun to engage in. This makes Tai Chi practice an excellent means to improve balance and reduce falls and delay cognitive decline in older individuals.

So, improve cognition and balance in older adults with Tai Chi.

“When you’re practicing the movements, you’re shifting your weight from one foot to the other to maintain balance. By doing (tai chi), you become more aware of the position of your body in space — which is something we become less aware of as we age.” – Michael Irwin

Objective: The present study Is exploratory in nature and aimed to examine the relationship between balance (both static and dynamic components) and global cognitive function among middle-aged and older adults through Tai Chi (TC) practice as a research avenue.

Methods: A short-term (12 weeks) intervention of TC was conducted among middle-aged and older adults in the community setting. Global cognitive function (using the Chinese version of the Montreal Cognitive Assessment score (MoCA) and balance (i.e., one leg standing test score; Timed Up and Go Test score, TUGT) of all participants were assessed before and after the intervention. Age, body mass index (BMI), sex, and physical fitness variables (Chair Stand Test, CST; the 6-Meter Walk Test, 6MWT) were also collected as confounding factors.