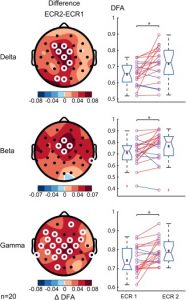 Reduce the Complexity of Brain Activity with Meditation

There has accumulated a large amount of research demonstrating that meditation practice has significant benefits for psychological, physical, and spiritual wellbeing. One way that meditation practices may produce these benefits is by altering the brain. The nervous system is a dynamic entity, constantly changing and adapting to the environment. It will change size, activity, and connectivity in response to experience. These changes in the brain are called neuroplasticity. Over the last decade neuroscience has been studying the effects of contemplative practices on the brain and has identified neuroplastic changes in widespread areas. In other words, meditation practice appears to mold and change the brain, producing psychological, physical, and spiritual benefits.

It is important to understand what are the exact changes in the brain that are produced by meditation. Studies of changes in brain activity with meditation suggest that meditators have more complicated information processing going on in their nervous systems at rest but during meditation greatly simplify that activity. But there are, a wide variety of meditation techniques that may have different consequences for brain changes. One category of these techniques is focused attention meditation, where the individual practices paying attention to a single meditation object, learns to filter out distracting stimuli, including thoughts, and learns to stay focused on the present moment, filtering out thoughts centered around the past or future.

So, reduce the complexity of brain activity with meditation.

“bringing attention back to the breath each time you feel your mind wandering during meditation helps strengthen the brain’s neural circuitry for focus.” – Nicole Bayes-Fleming

Our focus of attention naturally fluctuates between different sources of information even when we desire to focus on a single object. Focused attention (FA) meditation is associated with greater control over this process, yet the neuronal mechanisms underlying this ability are not entirely understood. Here, we hypothesize that the capacity of attention to transiently focus and swiftly change relates to the critical dynamics emerging when neuronal systems balance at a point of instability between order and disorder. In FA meditation, however, the ability to stay focused is trained, which may be associated with a more homogeneous brain state. To test this hypothesis, we applied analytical tools from criticality theory to EEG in meditation practitioners and meditation‐naïve participants from two independent labs. We show that in practitioners—but not in controls—FA meditation strongly suppressed long‐range temporal correlations (LRTC) of neuronal oscillations relative to eyes‐closed rest with remarkable consistency across frequency bands and scalp locations. The ability to reduce LRTC during meditation increased after one year of additional training and was associated with the subjective experience of fully engaging one’s attentional resources, also known as absorption. Sustained practice also affected normal waking brain dynamics as reflected in increased LRTC during an eyes‐closed rest state, indicating that brain dynamics are altered beyond the meditative state. Taken together, our findings suggest that the framework of critical brain dynamics is promising for understanding neuronal mechanisms of meditative states and, specifically, we have identified a clear electrophysiological correlate of the FA meditation state.