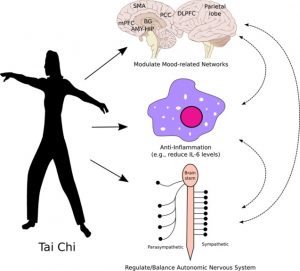 “A 12-week program of instruction and practice of the Chinese martial art tai chi led to significantly reduced symptoms of depression in Chinese Americans not receiving any other treatments.” – Science Daily

Being depressed and not responding to treatment or relapsing is a terribly difficult situation. The patients are suffering and nothing appears to work to relieve their intense depression. Suicide becomes a real possibility. So, it is imperative that other treatments be identified that can relieve the suffering. Mindfulness training is an alternative treatment for depression. It has been shown to be an effective treatment for depression and its recurrence and even in the cases where drugs fail.  Mindful Movement practices such as Qigong and Tai Chi have been found to be effective for depression. Research has been accumulating. So, it is important to step back and examine what has been learned regarding the application of Tai Chi practice for depression.

In today’s Research News article “Treating Depression With Tai Chi: State of the Art and Future Perspectives.” (See summary below or view the full text of the study at: https://www.ncbi.nlm.nih.gov/pmc/articles/PMC6474282/), Kong and colleagues review and summarize the published research on the effectiveness of Tai Chi practice for depression. They report that the published research has demonstrated that Tai Chi practice significantly decreases depression levels in a variety of groups including adults, the elderly, pregnant women, patients taking antidepressant drugs or not, and those with a variety of diseases including fibromyalgia, arthritis, multiple sclerosis, heart failure, mild dementia, and cerebrovascular disorder.

They report that the published research indicates that Tai Chi practice may lower depression by producing neuroplastic changes in the nervous system, particularly the brain’s Default Mode Network that’s known to be involved in self-referential thinking which is prevalent in depression. Another possible mechanism is indicated by the research demonstrating that Tai Chi reduces the physiological and psychological responses to stress, that are known to exacerbate depression. Tai Chi is also known to reduce the inflammatory response that is heightened in depression. In addition, Tai Chi is a mild exercise and exercise has been shown to reduce depression. Finally, Tai Chi practice appears to relax the autonomic component of the peripheral nervous system

The results of the published research suggests that Tai Chi  practice should be prescribed for depression. In addition, Tai Chi is a gentle and safe mindfulness practice. It is appropriate for all ages including the elderly and for individuals with illnesses that limit their activities or range of motion. It is inexpensive to administer, can be performed in groups or alone, at home or in a facility, and can be quickly learned. In addition, it can be practiced in social groups. This can make it fun, improving the likelihood of long-term engagement in the practice.

So, treat depression with Tai Chi.

“A 12-week program of instruction and practice of the Chinese martial art tai chi led to significantly reduced symptoms of depression in Chinese Americans not receiving any other treatments.” – Mayo Clinic

Major depressive disorder (MDD) is one of the most prevalent mental illnesses in America. Current treatments for MDD are unsatisfactory given high non-response rates, high relapse rates, and undesirable side effects. Accumulating evidence suggests that Tai Chi, a popular mind–body intervention that originated as a martial art, can significantly regulate emotion and relieve the symptoms of mood disorders. In addition, the availability of instructional videos and the development of more simplified and less structured Tai Chi has made it a promising low-intensity mind-body exercise. In this article, we first examine a number of clinical trials that implemented Tai Chi as a treatment for depression. Then, we explore several mechanisms by which Tai Chi may alleviate depressive symptoms, hypothesizing that the intervention may modulate the activity and connectivity of key brain regions involved in mood regulation, reduce neuro-inflammatory sensitization, modulate the autonomic nervous system, and regulate hippocampal neurogenesis. Finally, we discuss common challenges of the intervention and possible ways to address them. Specifically, we pose developing a simplified and tailored Tai Chi protocol for patients with depression, comparatively investigating Tai Chi with other mind–body interventions such as yoga and Baduanjin, and developing new mind–body interventions that merge the advantages of multiple mind–body exercises.