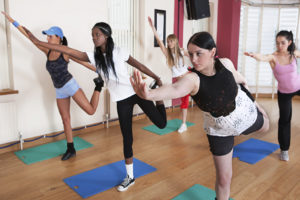 “Practicing yoga changes your mind: It changes the way you approach life, your body, and eating. Yoga shows you how to appreciate your body for all of the amazing things that it can do for you and points you in the direction of wanting to fill your body with the best possible fuel rather than processed junk food. And changing your mind about your body and the foods you feed it will be a much more effective weight-loss tool than burning a bunch of calories in an aggressive kick-boxing class and then mindlessly plowing through equal or more calories later that day.” – Heidi Kristoffer

Obesity has become an epidemic in the industrialized world. In the U.S. the incidence of obesity, has more than doubled over the last 35 years to currently around 35% of the population, while two thirds of the population are considered overweight or obese (Body Mass Index; BMI > 25). Obesity has been found to shorten life expectancy by eight years and extreme obesity by 14 years. This occurs because obesity is associated with cardiovascular problems such as coronary heart disease and hypertension, stroke, metabolic syndrome, diabetes, cancer, arthritis, and others.

Obviously, there is a need for effective treatments to prevent or treat overweight and obesity. But, despite copious research and a myriad of dietary and exercise programs, there still is no safe and effective treatment. It would be important to intervene early during growth to restrain the growth of body fatness. Mindfulness is known to be associated with lower risk for obesity, alter eating behavior and improve health in obesity. Yoga practice has been shown to have a myriad of physical and psychological benefits. These include significant loss in weight and body mass index (BMI), resting metabolism, and body fat in obese women with Type 2 diabetes and improves health in the obese. In addition, it has the added benefit of being a gentle exercise. Hence it would seem reasonable to further investigate the benefits of yoga practice on the weight and body composition during adolescence.

In today’s Research News article “How Is the Practice of Yoga Related to Weight Status? Population-Based Findings From Project EAT-IV.” (See summary below or view the full text of the study at: https://www.ncbi.nlm.nih.gov/pmc/articles/PMC5865393/ ), Neumark-Sztainer and colleagues utilized a longitudinal data set from Project EAT of adolescent Middle and High School students. They were measured for yoga practice, body size and demographic characteristics initially and after 5 years.

They found that 56.4% of females and 29.1% of males did some yoga while 20.5% of females and 6.1% of males practiced regularly in the past year. The frequency of yoga practice did not differ over weight status, but overweight adolescents were more likely to keep the yoga practice at a gentle level and less likely to engage in hot yoga or engage in a yoga class. Importantly, over the 5-year period the adolescents who practiced yoga had non-significant reductions in Body Mass Index (BMI), an index of body fatness while those that did not practice yoga had a significant increase in BMI. The adolescents who practiced yoga had significantly less body fatness gain over the 5-year period.

This study is important as it is a rare longitudinal look at body mass changes in adolescents over a 5-year period. But these results are correlational, so causation cannot be concluded. Nevertheless, the results are suggestive that adolescents benefit from yoga practice. They suggest that prolonged yoga practice works to restrain gain in body fatness during maturation. This could be very important during adolescence when body size is so important for the developing self-image and for social and romantic relationships, and is very important for their health and well-being later in life.

So, restrain body fatness growth during adolescence with yoga.

“Today urban society is stigmatized with chronic diseases. Unhealthy lifestyle is the main reason for the occurrence of chronic illness. BMI, is a reliable indicator of physical well-being of an individual, as there is urgent attention in the alarming rise of such diseases. Yoga works wonderful in stabilizing BMI and in restoring health.” – Minakshi Welukar

Yoga may provide a strategy for healthy weight management in young adults. This study examined prevalence and characteristics of young adults’ yoga practice and associations with changes in body mass index (BMI).

One thought on “Restrain Body Fatness Growth During Adolescence with Yoga”