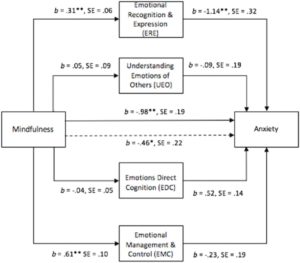 “It is well-documented that mindfulness helps to relieve depression and anxiety in adults. A small but growing body of research shows that it may also improve adolescent resilience to stress through improved cognitive performance and emotional regulation. This is encouraging news for anyone concerned about the increasing rates of depressive symptoms and suicide rates among adolescents in the United States” – Malka Main

Mindfulness training in adults has been shown to reduce anxiety and depression levels and improve emotional regulation. In addition, in adolescents it has been shown to improve emotion regulation and to benefit the psychological and emotional health. In today’s Research News article “Does Emotional Intelligence Mediate the Relation Between Mindfulness and Anxiety and Depression in Adolescents?” (See summary below or view the full text of the study at: https://www.frontiersin.org/articles/10.3389/fpsyg.2018.02463/full?utm_source=F-AAE&utm_medium=EMLF&utm_campaign=MRK_856297_69_Psycho_20181220_arts_A ), Foster and colleagues recruited 8th Grade students and had them complete an online questionnaire measuring mindfulness, anxiety, depression, and emotional intelligence, including subscales for emotional recognition and expression, understanding emotions, motions direct cognition, and emotional management and control. The data were then subjected to regression analysis.

The study was correlational. So, no conclusions about causation can be reached. The results, however, suggest that adolescents are similar to adults in having clear relationships between mindfulness, emotional intelligence, and psychological health. Like adults, the adolescents’ levels of mindfulness and emotional intelligence are associated with lower levels of anxiety and depression. The results, though, also suggest that mindfulness’ association with anxiety and depression is partly by a direct association and partly indirectly through an association with emotional intelligence. This further highlights the fact that mindfulness is an important contributor to the development of an understanding of and ability to regulate emotions. It can’t be overemphasized how important this is for the adolescent in navigating the turbulent years of adolescence.

So, mindfulness is associated with lower anxiety and depression in adolescents partly by higher emotional intelligence.

“Anything that increases awareness helps with the struggle with depression, anxiety, and substance use. In terms of adolescents increasing awareness actually increases maturation—particularly if the practice is done in an environment leading to increased connection with others who understand your challenges.” – Michel Mennesson