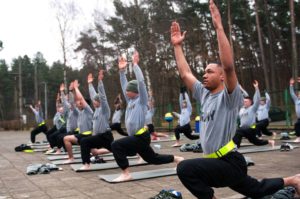 Reduce the Symptoms of PTSD with Yoga

“It can be very difficult to stay in your own body when you’re getting flashbacks. The lighting changes, and you feel like you’re not even in the room. . . . [Yoga] reminds me that if I just keep plodding along, I can get there,” she says. “I can face it in little chunks and say, “I can work with this piece.'” – Denise Wills

Obviously, these are troubling symptoms that need to be addressed. There are a number of therapies that have been developed to treat PTSD. One of which, mindfulness training has been found to be particularly effective. In addition, yoga has been shown to help relieve the symptoms of PTSD. In today’s Research News article “Yoga for posttraumatic stress disorder – a systematic review and meta-analysis.” (See summary below or view the full text of the study at: https://www.ncbi.nlm.nih.gov/pmc/articles/PMC5863799/ ), Cramer and colleagues review, summarize, and perform a meta-analysis of the published randomized controlled trials of the application of yoga practice for the treatment of the symptoms of Post-Traumatic Stress Disorder (PTSD).

They found 7 randomized controlled trials on 284 patients. They found that most of the research was of low quality. But, these studies found that yoga practice produced significant improvements in PTSD symptoms. There was good retention of participants in the yoga practice groups. In addition, there were no significant adverse events reported. Hence, they found that the published literature suggests that yoga practice is helpful for the relief of the symptoms of PTSD but the evidence was rather weak. This strongly suggests that better controlled, larger randomized controlled trials are needed.

Yoga is a complex practice, usually involving multiple components of postures, breathing exercises and meditation. It is not known which of these components or which combinations are necessary for effectiveness. The sole piece of evidence found was that the trial that did not contain the postures component did not find significant relief of symptoms. This suggests that the practice of yoga postures is the critical component.

So, reduce the symptoms of Post-Traumatic Stress Disorder (PTSD) with yoga.

“The first step in yoga practice is to link the mind and body through the breath, bringing awareness to what is happening in the moment. Intense feelings and thoughts can be experienced and reduced in intensity as the mind becomes more still and calm and the body allows the sensations to pass. An experience of a deeper level of existence is possible allowing the body mind complex to feel peace and generate positive emotions and enter a transformative period. With repeated practice and guidance, a yoga practice can bring long term relief and a fresh perspective on life for PTSD sufferers.” – The Art of Living

Yoga is increasingly used as a therapeutic treatment and seems to improve psychiatric conditions such as anxiety disorders and depression. The aim of this systematic review was to assess the evidence of yoga for reducing symptoms of posttraumatic stress disorder (PTSD).

The Cochrane Library, Medline/PubMed, PsycINFO, Scopus, and IndMED were searched through July 2017 for randomized controlled trials (RCTs) assessing the effects of yoga on symptoms of PTSD. Mean differences (MD) and standardized mean differences (SMD) with 95% confidence intervals (CI) were computed. The quality of evidence and the strength of recommendation were graded according to the GRADE recommendations.

Few RCTs with only limited sample size were available.

Only a weak recommendation for yoga as an adjunctive intervention for PTSD can be made. More high quality research is needed to confirm or disconfirm these findings.