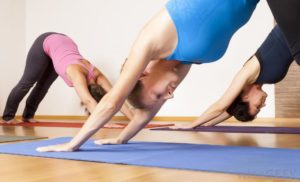 “Knowledge of yoga can help relieve us, direct us and give clarity of mind. It is the ultimate self-help. The first step in yoga practice is to link the mind and body through the breath, bringing awareness to what is happening in the moment. Intense feelings and thoughts can be experienced and reduced in intensity as the mind becomes more still and calm and the body allows the sensations to pass. With repeated practice and guidance, a yoga practice can bring long term relief and a fresh perspective on life for PTSD sufferers.” – Art of Living

Obviously, these are troubling symptoms that need to be addressed. There are a number of therapies that have been developed to treat PTSD. One of which, mindfulness training has been found to be particularly effective. In today’s Research News article “Yoga for Adult Women with Chronic PTSD: A Long-Term Follow-Up Study.” (See summary below), Rhodes and colleagues examine the ability of yoga practice to treat the symptoms of Post-Traumatic Stress Disorder (PTSD) in women who had persistent symptoms that didn’t respond to treatment. They demonstrated in a prior study that yoga practice produces significant reductions in PTSD symptom severity and PTSD diagnosis and decreases in engagement in negative tension reduction activities (e.g., self-injury), and greater reductions in dissociative and depressive symptoms. In the present study, they performed a long-term follow-up by measuring the participants 1.5 years later for PTSD symptoms, dissociative experiences, depression, engagement in negative tension reduction activities (e.g., self-injury), and stressful life events.

They found that 1.5 years after the completion of the study the differences between the yoga and control groups were no longer present. They found that 88% of the women in the yoga practice group continued to practice. After completion of the control condition, the participants were offered training in yoga and 44% chose it. All of these women continued practice later. They found, however, that the higher the frequency of yoga practice at follow-up the lower the levels of depression and PTSD symptom severity and the lower the likelihood of a PTSD diagnosis.

“The goal of treatment should be to resolve this disconnect. “If we can help our patients tolerate their own bodily sensations, they’ll be able to process the trauma themselves. . . patients, particularly those suffering from treatment-resistant PTSD, yoga has proved an especially good way to do this.” – Jeneen Interlandi

Introduction: Yoga-the integrative practice of physical postures and movement, breath exercises, and mindfulness-may serve as a useful adjunctive component of trauma-focused treatment to build skills in tolerating and modulating physiologic and affective states that have become dysregulated by trauma exposure. A previous randomized controlled study was carried out among 60 women with chronic, treatment-resistant post-traumatic stress disorder (PTSD) and associated mental health problems stemming from prolonged or multiple trauma exposures. After 10 sessions of yoga, participants exhibited statistically significant decreases in PTSD symptom severity and greater likelihood of loss of PTSD diagnosis, significant decreases in engagement in negative tension reduction activities (e.g., self-injury), and greater reductions in dissociative and depressive symptoms when compared with the control (a seminar in women’s health). The current study is a long-term follow-up assessment of participants who completed this randomized controlled trial. Methods: Participants from the randomized controlled trial were invited to participate in long-term follow-up assessments approximately 1.5 years after study completion to assess whether the initial intervention and/or yoga practice after treatment was associated with additional changes. Forty-nine women completed the long-term follow-up interviews. Hierarchical regression analysis was used to examine whether treatment group status in the original study and frequency of yoga practice after the study predicted greater changes in symptoms and PTSD diagnosis. Results: Group assignment in the original randomized study was not a significant predictor of longer-term outcomes. However, frequency of continuing yoga practice significantly predicted greater decreases in PTSD symptom severity and depression symptom severity, as well as a greater likelihood of a loss of PTSD diagnosis. Conclusions: Yoga appears to be a useful treatment modality; the greatest long-term benefits are derived from more frequent yoga practice.