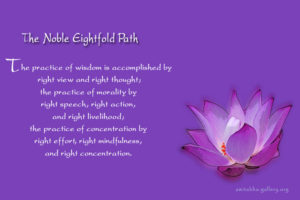 “Concentration relates closely to the final limb, mindfulness. Both are different forms of awareness, but of the two concentration is more deliberate and narrow, mindfulness broader, more spontaneous and more open and receptive.” – Clearvision

Mindfulness is an openness to all experiences no matter what comes up. On the other hand, concentration is to focus on only one or a small subset of what is present. So, Right Concentration is a different aspect of mind training from Right Mindfulness. It is the eighth and last component of the Noble Eightfold Path, Right View, Right Intentions, Right Speech, Right Actions, Right Livelihood, Right Effort, Right Mindfulness and Right Concentration. But, all of these components are interconnected and depend upon one another. So, it’s position is arbitrary and should not be construed that it’s the least component. They are all important in the integrated interdependent whole of the path.

A good example of Right Concentration is focused meditation where a single aspect or select set of aspects is concentrated upon to the exclusion of other aspects. This is often the breath but can also be a mantra, a special word, a particular person, or basically anything that can be separated from everything else. Concentration filters out everything but the object of concentration. So, the mind is not distracted. A concentrated mind is described as single pointed, focused totally on one thing and one thing only. The Buddha taught that when one pointedness is attained it produces a state of great tranquility and peace. Hence, the two primary features of Right Concentration are unbroken attentiveness to an object and a consequent tranquility.

There are many levels of concentration and as the practice of focused meditation develops the individual moves through deeper and deeper levels. As the practice begins, the mind will inevitably wander. When the meditator becomes aware that the mind has strayed, s/he simply gently returns to the object of concentration. It is sometimes helpful to congratulate yourself on returning rather than feeling bad about wandering. The idea is to reinforce and strengthen being concentrated rather than punishing the mind for doing what it naturally does. This will make it more and more likely that the meditator will return quickly once the mind wanders and stays focused longer and longer.

The development of Right Concentration is not a linear process with the meditator getting better and better with every meditation. It is rather highly variable with concentration easy and prolonged one day followed by another day when it is difficult and short-lived with mind wandering the rule. Rather than being frustrated with this the practitioner simply needs to continue practicing with assurance that over time concentration will get deeper and deeper more and more often and un-concentrated meditation will get rarer and rarer.

As practice continues concentration will deepen going through a number of stages, initial application of mind, sustained application of mind, rapture, happiness, and one-pointedness. The initial application of mind is settling and acquiring the object of meditation and focusing on it alone. This slowly becomes a sustained application of mind, where the focus on the object is held for a prolonged period of time. Rapture and happiness begin to become a by-product of the sustained attention as the practitioner feels joy and happiness with successful concentration. Finally, the concentration develops to the level of one pointedness, with the mind unified and completely focused on the object of meditation to the exclusion of everything else.
The attainment of one pointedness relaxes the mind with its activities greatly diminished. As the mind quiets, consciousness is allowed to be on its own without interruption and it begins to move into deeper and deeper states on consciousness. The meditative absorption deepens and consciousness moves into various stages known as the “jhanas.” The first and second being one pointedness accompanied by joy and happiness, the only difference between the two is the level of refinement of the concentration. The third “jhana” involves a continuation of one pointedness and happiness but with the addition of clear comprehension and equanimity, where things are seen just as they are without judgment or valuation. The fourth “jhana” involves solely one pointedness, a state of pureness of consciousness, unmarred by feelings.

Regardless, of these deeper states of consciousness, the process of developing concentration is very beneficial in everyday life. The ability to stay with a task without distraction or the mind wandering away improves work, study, or even relationships, virtually everything.  So, practice Right Concentration and move forward on the path toward spiritual enlightenment.