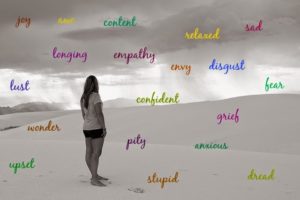 Improve the Regulation of Emotions in Social Anxiety Disorder with Mindfulness

“One way to do this . . . is mindfulness meditation, in which you observe your thoughts and feelings with the objectivity of a disinterested, nonjudgmental witness. This form of mental training gives you the wherewithal to pause, observe how easily the mind can exaggerate the severity of a setback, note that it as an interesting mental process, and resist getting drawn into the abyss,” – Ritchie Davidson

Mindfulness practices have been shown to have a large number of beneficial effects on the psychological, emotional, and physical health of the individual and is helpful in the treatment of mental and physical illness. They have also been shown to effect a large number of physiological and psychological processes, including emotion regulation, attention, sensory awareness, decentering, and reappraisal. It is not known how mindfulness practices produce the myriad effects on the individual’s health and well-being, whether mindfulness has a direct effect or works through intermediary effects to produce the improved well-being.

There has been some research on this question, for instance mindfulness has been found to improve some symptoms of mental illness by increasing reappraisal which then affects the symptoms. In today’s Research News article “Testing the mindfulness-to-meaning theory: Evidence for mindful positive emotion regulation from a reanalysis of longitudinal data.” (See summary below or view the full text of the study at: https://www.ncbi.nlm.nih.gov/pmc/articles/PMC5718463/ ), Garland and colleagues examine the hypothesis that mindfulness practices influence social anxiety disorder (SAD) through a series of intermediaries. They postulate that mindfulness training increases attention which, in turn increases decentering, which, in turn, broadens sensory awareness, which, in turn increases reappraisal, which increases emotion regulation and reductions in social anxiety disorder (SAD).

To examine this idea they reanalyzed the data from a longitudinal study of the effects of Mindfulness-Based Stress Reduction (MBSR) and Cognitive Behavioral Therapy (CBT) on social anxiety disorder (SAD) to determine the temporal sequence of mindfulness effects. Participants with SAD were randomly assigned to receive either 12 weeks of MBSR or CBT group therapy or on a wait-list control condition. MBSR consists of a combination of meditation, body scanning, and yoga practices. The participants were measured pretreatment, post-treatment, and 3, 6, 9, and 12 months later for attentional control, decentering, reappraisal, sensory awareness, dispositional mindfulness, emotion regulation and positive emotions. The data were analyzed with a sophisticated multivariate path analysis.

So, improve the regulation of emotions in social anxiety disorder with mindfulness.

“Through your mindful acceptance, you can embrace or hold the feeling in your awareness– this alone can calm and soothe you. This is an act of self-compassion and responsiveness to your own distress, and it is so much more effective than punishing yourself for having this feeling.” – Melli O’Brien

We conducted a post-hoc reanalysis of longitudinal data (N = 107) derived from a RCT of mindfulness-based stress reduction (MBSR) versus cognitive-behavioral therapy (CBT) for social anxiety disorder to model the core constructs of the MMT (attentional control, decentering, broadened awareness, reappraisal, and positive affect) in a multivariate path analysis.

Results suggest that the mechanisms of change identified by the MMT form an iterative chain that promotes long-term increases in positive affectivity. Though these mechanisms may reflect common therapeutic factors that cut across mindfulness-based and cognitive-behavioral interventions, MBSR specifically boosts the MMT cycle by producing significantly greater increases in decentering and broadened awareness than CBT, providing support for the foundational assumption in the MMT that mindfulness training may be a key means of stimulating downstream positive psychological processes.