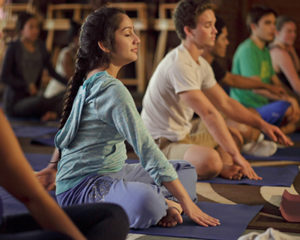 Mindfulness is Associated with Reduced Inflexibility and Psychopathology in Adolescents

“As present-moment focused, mindfulness, acceptance, and defusion interventions alter the context, behavioral flexibility emerges and, with it, increased sensitivity to context, including that aspect of context we call consequences.” – Kelly Wilson

Adolescence should be a time of mental, physical, social, and emotional growth. It is during this time that higher levels of thinking, sometimes called executive function, develops. These executive functions are an important foundation for success in the complex modern world. But, adolescence can be a difficult time, fraught with challenges. During this time the child transitions to young adulthood; including the development of intellectual, psychological, physical, and social abilities and characteristics. There are so many changes occurring during this time that the child can feel overwhelmed and unable to cope with all that is required.

Making these profound changes successfully requires a good deal or flexibility, adapting and changing with the physical, psychological, and social changes of adolescence. In today’s Research News article “Inflexible Youngsters: Psychological and Psychopathological Correlates of the Avoidance and Fusion Questionnaire for Youths in Nonclinical Dutch Adolescents.” See summary below or view the full text of the study at: https://www.ncbi.nlm.nih.gov/pmc/articles/PMC5605724/, Muris and colleagues examined the relationships between mindfulness, inflexibility and mental health in adolescents. They recruited youths aged 12 to 16 years and had them complete measures of mindfulness, psychological inflexibility, thought suppression self-compassion, self-worth, self-efficacy, somatization, psychopathological symptoms, anxiety, depression, and aggression.

It is important to keep in mind that this study was correlational and did not manipulate the levels of any variables. So, causal connections cannot be determined between the variables. The associations though suggest that both mindfulness and psychological flexibility are important contributors to the psychological development of adolescents. It will be interesting to investigate in future research whether training in mindfulness and flexibility will help to promote healthy mental health in youths.

“While psychological inflexibility was most strongly associated with Neuroticism , as expected, mindfulness demonstrated the strongest association with consciousness, a trait reflecting impulse control abilities and attention to detail.” – Robert Latzman

The present study examined psychological and psychopathological correlates of psychological inflexibility as measured by the Avoidance and Fusion Questionnaire for Youth (AFQ-Y) in two independent samples of nonclinical Dutch adolescents aged between 12 and 18 years (Ns being 184 and 157). Participants completed a survey containing the AFQ-Y and scales assessing mindfulness, thought suppression, self-compassion, self-worth, self-efficacy, and internalizing/externalizing symptoms. In both samples, the AFQ-Y was found to be a reliable measure of psychological inflexibility that correlated in a theoretically meaningful way with other psychological constructs. Most importantly, AFQ-Y scores correlated positively with internalizing and externalizing symptoms, and in most cases, these associations remained significant when controlling for other measures. These findings suggest that psychological inflexibility is an important factor in youth psychopathology that needs to be further investigated in future research.