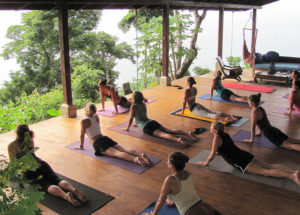 Improve Psychology and Physiology with a Meditation and Yoga Retreat

“Yoga is fantastic for decreasing stress levels, and research has also shown that those who practice yoga regularly have higher levels of leptin and adiponectin in their bodies. Both of these natural chemicals work to alleviate inflammation in the body.” –  Julie Montagu

The immune system is designed to protect the body from threats like stress, infection, injury, and toxic chemicals. One of its tools is the Inflammatory response. This response works quite well for short-term infections and injuries. But when inflammation is protracted and becomes chronic, it can itself become a threat to health. It can produce autoimmune diseases such as colitis, Chron’s disease, arthritis, heart disease, increased cancer risk, lung disease, sleep disruption, gum disease, decreased bone health, psoriasis, and depression. Needless to say, chronic inflammation can create major health problems. Indeed, the presence of chronic inflammation is associated with reduced longevity. So, it is important for health to control the inflammatory response, allowing it to do its job in fighting off infection but reducing its activity when no external threat is apparent.

Of course, it is far better to prevent chronic inflammation in the first place than to treat it later. Mind-body techniques such as yoga, Tai Chi and meditation have been shown to adaptively reduce the inflammatory response. Most of these results were obtained from treating diseased individuals. It is important to establish if Mind-body techniques can be effective in preventing chronic inflammation also in healthy individuals. In today’s Research News article “Yoga, Meditation and Mind-Body Health: Increased BDNF, Cortisol Awakening Response, and Altered Inflammatory Marker Expression after a 3-Month Yoga and Meditation Retreat.” See summary below or view the full text of the study at: https://www.ncbi.nlm.nih.gov/pmc/articles/PMC5483482/, Cahn and colleagues investigate the effects of a 3-month yoga and meditation retreat on the functioning of the immune and activation systems.

They recruited male and female experienced yoga and meditation practitioners (average of 2 hours practice per day for 4.5 years) who were participating in a 3-month yoga and meditation retreat. The retreat involved daily yoga (about 1.5 hours per day), meditation (about 2 hours), and chanting (about 1 hour) practices and a vegetarian diet. They were measured before and during the last week of the retreat for mindfulness, psychological symptoms, and absorption. They also provided a saliva sample for cortisol assay and a blood sample for markers of the inflammatory processes.

They found that although the participants had high psychological health before the retreat that following the retreat there were significant reductions in psychological symptoms including depression, anxiety, and bodily symptoms and an increase in mindfulness. There were also significant increases in the neurotrophic factor, BDNF, pro-inflammatory factors, and cortisol levels immediately after waking up in the morning. Hence participation in the retreat produced improved psychological health, brain protection and development factor, and increased inflammatory system activity, and morning activation. The study did not have a control condition. So, the results could be due simply to the passage of time or expectancy or attentional effects. Future studies should include a control condition.

So, improve the physiology to control inflammation and stress with a meditation and yoga retreat.

“The more we learn about yoga, the more we realize the benefits aren’t all in the mind. . . Yoga helps people to relax, making the heart rate go down, which is great for those with high blood pressure. The poses help increase flexibility and strength, bringing relief to back pain sufferers. Now, . . . it seems that those meditative sun salutations and downward dog poses can reduce inflammation, the body’s way of reacting to injury or irritation.” – Susan Brink

Thirty-eight individuals (mean age: 34.8 years old) participating in a 3-month yoga and meditation retreat were assessed before and after the intervention for psychometric measures, brain derived neurotrophic factor (BDNF), circadian salivary cortisol levels, and pro- and anti-inflammatory cytokines. Participation in the retreat was found to be associated with decreases in self-reported anxiety and depression as well as increases in mindfulness. As hypothesized, increases in the plasma levels of BDNF and increases in the magnitude of the cortisol awakening response (CAR) were also observed. The normalized change in BDNF levels was inversely correlated with BSI-18 anxiety scores at both the pre-retreat (r = 0.40, p < 0.05) and post-retreat (r = 0.52, p < 0.005) such that those with greater anxiety scores tended to exhibit smaller pre- to post-retreat increases in plasma BDNF levels. In line with a hypothesized decrease in inflammatory processes resulting from the yoga and meditation practices, we found that the plasma level of the anti-inflammatory cytokine Interleukin-10 was increased and the pro-inflammatory cytokine Interleukin-12 was reduced after the retreat. Contrary to our initial hypotheses, plasma levels of other pro-inflammatory cytokines, including Interferon Gamma (IFN-γ), Tumor Necrosis Factor (TNF-α), Interleukin-1β (IL-1β), Interleukin-6 (IL-6), and Interleukin-8 (IL-8) were increased after the retreat. Given evidence from previous studies of the positive effects of meditative practices on mental fitness, autonomic homeostasis and inflammatory status, we hypothesize that these findings are related to the meditative practices throughout the retreat; however, some of the observed changes may also be related to other aspects of the retreat such as physical exercise-related components of the yoga practice and diet. We hypothesize that the patterns of change observed here reflect mind-body integration and well-being. The increased BDNF levels observed is a potential mediator between meditative practices and brain health, the increased CAR is likely a reflection of increased dynamic physiological arousal, and the relationship of the dual enhancement of pro- and anti-inflammatory cytokine changes to healthy immunologic functioning is discussed.