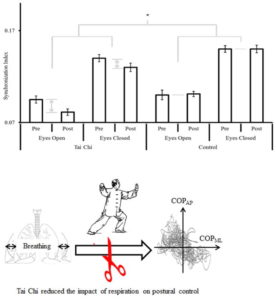 “Practising the ancient martial art of Tai Chi is so beneficial to elderly people’s health that it should be “the preferred mode of training”, according to scientists.” – The Telegraph

The process of aging affects every aspect of the physical and cognitive domains. Every system in the body deteriorates including motor function with a decline in strength, flexibility, and balance. Impaired balance is a particular problem as it can lead to falls. In the U.S. one third of people over 65 fall each year and 2.5 million are treated in emergency rooms for injuries produced by falls. About 1% of falls result in deaths making it the leading cause of death due to injury among the elderly. Falls, with or without injury, also carry a heavy quality of life impact. A growing number of older adults, fear falling and, as a result, limit their activities and social engagements. This can result in further physical decline, depression, social isolation, and feelings of helplessness. It is obviously important to discover methods to improve balance and decrease the number of fall in the elderly.

An interesting contributor to imbalance is the synchronization of respiration with postural sway. When a person stands erect, with eyes closed, there is a normal sway in the posture. When respiration occurs the expansion of the abdomen and chest produces a slight shift in the center of gravity and the body sways to compensate. When the normal sway becomes synchronized with the sway produced by respiration, it results in an exaggeration of the sway. This produces a greater imbalance. This is usually minor and of very little consequence. But, in the elderly, with compromised balance and muscular control, the small extra imbalance may be a contributor to falls.

Tai Chi training is designed to enhance and regulate the functional activities of the body through regulated breathing, mindful concentration, and gentle movements. It includes balance training and has been shown to improve balance and coordination. Indeed, Tai Chi training has been shown to reduce the likelihood of falls in the elderly. One possible way that Tai Chi training may contribute to the decrease in falls is by decreasing posturo-respiratory synchronization. This interesting speculation has not been previously investigated.

In today’s Research News article “Tai Chi training reduced coupling between respiration and postural control.” See summary below or view the full text of the study at:

Falls become more and more likely with age and the consequences of falls to the elderly can be devastating. So, a practice that can lower the risk of falls is important for the health and well-being of the elderly. Tai Chi is not strenuous, involves slow gentle movements, and is safe, having no appreciable side effects. So, it is well suited as an exercise for an elderly population. In addition, once learned it can be practiced at home or in groups, making it a flexible very low cost solution. Hence, it appears that Tai Chi should be recommended to the elderly to improve balance and reduce falls and thereby improve the health and well-being of the elderly.

So, improve balance in the elderly by uncoupling posture and respiration with tai chi.

“One of the greatest benefits of Tai Chi for the elderly is that even individuals who have physical limitations can practice this ancient healing art. Because it is comprised of a series of slow, relaxed movements, Tai chi is a non-strenuous activity that will not put added strain on weakened muscles. Tai Chi movements help encourage proper posture and rely on constant gentle movements that force the individual to concentrate and breathe deeply, two important techniques that are often overlooked in the elderly community.” – Delialah Falcon