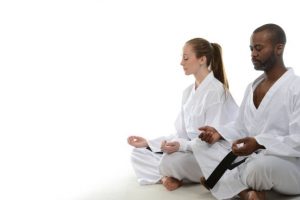 “So, while ‘mindfulness’ may seem like a current fad, the Zen-influenced philosophy and practice of karate training is in fact infused with mindfulness.” – Kris Chapman

Athletic performance requires the harmony of mind and body. Excellence is in part physical and in part psychological. That is why an entire profession of sports psychology has developed. “In sport psychology, competitive athletes are taught psychological strategies to better cope with a number of demanding challenges related to psychological functioning.” They use a number of techniques to enhance performance including mindfulness training. It has been shown to improve attention and concentration and emotion regulation and reduces anxiety and worry and rumination, and the physiological and psychological responses to stress. As a result, mindfulness training has been employed by athletes and even by entire teams to enhance their performance.

In today’s Research News article “The Relationship between Mindfulness Practices and the Psychological State and Performance of Kyokushin Karate Athletes.” (See summary below or view the full text of the study at: https://www.ncbi.nlm.nih.gov/pmc/articles/PMC8997751/ ) Vveinhardt and Kaspare recruited adult Karate athletes and had them complete measures of mindfulness, meditation experience, anxiety, depression, perceived stress, emotional state, Karate experience, and duration and intensity of sporting experience.

The aim of this study was to determine the relationship between mindfulness practices and the psychological state and qualification of kyokushin karate athletes. The survey was conducted using the Mindful Attention Awareness Scale (MAAS-15) and the Depression, Anxiety and Stress Scale (DASS-21). The study involved 371 Lithuanian kyokushin karate athletes (of which 59.3% were male and 40.7% were female; 71.4% of research participants have practiced this sport for 11 and more years and have the 1st dan or a higher belt). The results of the study showed a positive impact of mindfulness in reducing stress experienced by athletes, improving their psychological state, and enhancing their athletic performance. A moderate negative correlation was identified between stress, anxiety, and mindfulness, and while the mindfulness score was increasing, the severity level of depression was decreasing. Meanwhile, the correlation of the meditation effect and anxiety with kyokushin karate 0–7 kyu belt was very weak but statistically significant. The research results could be useful not only for athletes and their coaches but also for sports organizations. After analysing the benefits of mindfulness for kyokushin karate athletes, mindfulness practices are proposed for the effective improvement of athletes’ physical and psychological state when preparing for professional-level competitions.