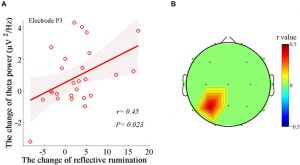 “People at risk for depression are dealing with a lot of negative thoughts, feelings and beliefs about themselves and this can easily slide into a depressive relapse. . . MBCT helps them to recognize that’s happening, engage with it in a different way and respond to it with equanimity and compassion.” – Willem Kuyken

Being depressed and not responding to treatment or relapsing is a terribly difficult situation. The patients are suffering and nothing appears to work to relieve their intense depression. Suicide becomes a real possibility. So, it is imperative that other treatments be identified that can relieve the suffering. Mindfulness training has been shown to be an effective treatment for depression and its recurrence and even in the cases where drugs fail.

The most commonly used mindfulness technique for the treatment of depression is Mindfulness-Based Cognitive Therapy (MBCT).  MBCT involves mindfulness training, containing sitting and walking meditation and body scan, and cognitive therapy to alter how the patient relates to the thought processes that often underlie and exacerbate psychological symptoms. MBCT has been shown to be as effective as antidepressant drugs in relieving the symptoms of depression and preventing depression reoccurrence and relapse. In addition, it appears to be effective as either a supplement to or a replacement for these drugs. It is not known how MBCT produces its effects on major depression.

In today’s Research News article “Mindfulness-Based Cognitive Therapy in Recurrent MDD Patients With Residual Symptoms: Alterations in Resting-State Theta Oscillation Dynamics Associated With Changes in Depression and Rumination.” (See summary below or view the full text of the study at: https://www.ncbi.nlm.nih.gov/pmc/articles/PMC8936084/ ) Wang and colleagues recruited patients with major depressive disorder being treated with drugs but with residual symptoms. They were provided with an 8-week program of Mindfulness-Based Cognitive Therapy (MBCT). Before and after training they were measured for mindfulness, depression, and rumination and had their resting state electroencephalogram (EEG) recorded.

Hence, they found that Mindfulness-Based Cognitive Therapy (MBCT) is effective in treating depression even in patients under treatment with drugs. They also found that these improvements were related to increased theta power in the electroencephalogram (EEG). So, MBCT appears to change brain activity along with depression. The changes in the neural activity may be a mechanism by which MBCT helps improve depression symptoms.

Many patients with major depressive disorder (MDD) suffer from residual symptoms. Rumination is a specific known risk factor for the onset, severity, prolongation, and relapse of MDD. This study aimed to examine the efficacy and EEG substrates of mindfulness-based cognitive therapy (MBCT) in alleviating depression and rumination in an MDD population with residual symptoms. We recruited 26 recurrent MDD individuals who had residual symptoms with their current antidepressants to participate in the 8-week MBCT intervention. We evaluated the efficacy and changes in the dynamics of resting-state theta rhythm after the intervention, as well as the associations between theta alterations and improvements in depression and rumination. The participants showed reduced depression, enhanced adaptive reflective rumination, and increased theta power and phase synchronization after MBCT. The increased theta-band phase synchronizations between the right occipital regions and the right prefrontal, central, and parietal regions were associated with reduced depression, while the increase in theta power in the left parietal region was associated with improvements in reflective rumination. MBCT could alleviate depression and enhance adaptive, reflective rumination in recurrent MDD individuals with residual symptoms through the modulation of theta dynamics in specific brain regions.