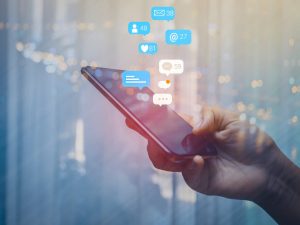 “social media overuse is increasingly commonplace today, and it may have some serious repercussions to your physical and mental health.” – Kristeen Cherney

Over the last few decades, the internet has gone from a rare curiosity to the dominant mode of electronic communications. In fact, it has become a dominant force in daily life, occupying large amounts of time and attention. As useful as the internet may be, it can also produce negative consequences. “Problematic Internet Use” is now considered a behavioral addiction, with almost half of participants in one study considered “Internet addicts”, developing greater levels of “tolerance” and experiencing “withdrawal” and distress when deprived. This phenomenon is so new that there is little understanding of its nature, causes, and consequences and how to treat it.

In today’s Research News article “The reciprocal relationships between social media self-control failure, mindfulness and wellbeing: A longitudinal study.” (See summary below or view the full text of the study at: https://www.ncbi.nlm.nih.gov/pmc/articles/PMC8336798/ ) Du and colleagues recruited participants online between the ages of 16 to 60 years of age and had them complete measures of social media control, mindfulness, well-being, and life satisfaction. They completed the measures three times at four-month intervals.

These results are correlative and as such caution must be exercised in interpreting causation. But mindfulness training has been found in prior research to reduce internet addictions. In addition, the associations found between variables and other variables 4 months later prohibit a reverse causation explanation. So, the associations reported here may well be due to causal connections. Hence, it could be tentatively concluded that being able to control participation in social media improves mindfulness and mindfulness improves the individual’s ability to control their participation in social media.

This is potentially important as participation in social media often gets out of control to the point where it interferes in everyday activities to the detriment of the individual. It can even become an addiction. That being mindful can help keep it under control may be very helpful allowing attention to other life activities. Although it was not explored in the present study this suggests that mindfulness training may help make the individual resistant to losing control of participation in social media.