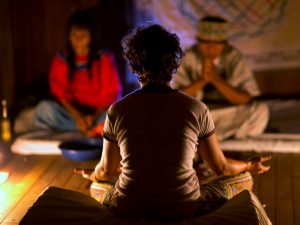 “the results of decreased neuroticism and increased openness and agreeableness were statistically significant when compared with the control groups, providing more specific support for ayahuasca’s therapeutic role.” – Alex Criddle

Psychedelic substances such as peyote, mescaline, LSD, Bufotoxin, ayahuasca and psilocybin have been used almost since the beginning of recorded history to alter consciousness and produce spiritually meaningful experiences. Psychedelics produce effects that are similar to those that are reported in spiritual awakenings. They report a loss of the personal self, a decentering. They experience what they used to refer to as the self as just a part of an integrated whole. They report feeling interconnected with everything else in a sense of oneness with all things. They experience a feeling of timelessness where time seems to stop and everything is taking place in a single present moment. They experience ineffability, being unable to express in words what they are experiencing and as a result sometimes producing paradoxical statements. And they experience a positive mood, with renewed energy and enthusiasm.

In today’s Research News article “Modulatory effects of ayahuasca on personality structure in a traditional framework.” (See summary below or view the full text of the study at: https://www.ncbi.nlm.nih.gov/pmc/articles/PMC7524857/ ) Netzband and colleagues recruited adults seeking an experience with ayahuasca and a matched group of adults. The experimental group attended a 12-day retreat at the Ayahuasca Foundation where they received 6 standardized Ayahuasca sessions under close supervision. They were measured before and after the retreat and 6 months later for mystical experiences and the big five personality traits; openness to experience, conscientiousness, extraversion, agreeableness, and neuroticism.

They found that in comparison to the baseline and the matched control group that the group that received Ayahuasca had a significant decrease in neuroticism and an increase in agreeableness, and openness to experience after the retreat. These changes were stable as they were maintained at the 6-month follow-up. In addition, they found that the greater the mystical experiences occurring the greater the reduction in neuroticism.

It should be kept in mind that this is a non-equivalent control group design. It would have been a stronger design if the comparison group was a wait-list groups of Ayahuasca seekers. So, care must be taken in interpreting the results.

Neuroticism involves a tendency toward anxiety, depression, self-doubt, and other negative feelings. The results then suggest that Ayahuasca experience improves neuroticism thereby improving the mental health of the participants. This is also reflected in the increase in agreeableness, the positive traits of kindness, sympathy, cooperation, warmth, and consideration. These findings then suggest that psychedelic experiences improve the mental health of the participants. Since, the degree of improvement was related to the degree of mystical experience occurring, it is possible that having mystical experiences fundamentally changes the individual improving their psychological health. These findings are compatible with the use of psychedelics to treat mental illness.

So, improve personality with psychedelic drugs.

“After the ayahuasca use, more than 80% of those subjects showed clinical improvements that persisted at 6 months. The questionnaires showed significant reductions in depression and psychopathology. . . long-term users showed lower depression scores, and higher scores for self-transcendence and quality of life.” – Daniel F. Jiménez-Garrido

Ayahuasca is a psychoactive plant brew containing dimethyltryptamine (DMT) and monoamine oxidase inhibitors (MAOIs). It originates from the Amazon basin, where it is used primarily for ceremonial purposes. Ayahuasca tourists are now entering certain communities seeking alternative physical or psychological healing, as well as spiritual growth.

This paper assesses the impact of ayahuasca on personality in a traditional framework catering for ayahuasca tourists.

Within a mixed design, we examined the effect of ayahuasca on participants’ personality (measured by the NEO Personality Inventory 3 questionnaire) across time (pre- to post-ayahuasca administration, and 6-month follow-up), relative to a comparison group (who did not ingest ayahuasca).

The results demonstrated significant increases in agreeableness pre- and post-ayahuasca administration and significant reductions in neuroticism in 24 participants, relative to the comparison group. Both of these changes were sustained at 6-month follow-up, and trait level increases were also observed in openness at this stage. Additionally, greater perceived mystical experience (measured using the Mystical Experience Questionnaire 30) was associated with increased reductions in neuroticism.

These findings, which indicate a positive mediating effect of ayahuasca on personality, support the growing literature suggesting potential therapeutic avenues for serotonergic psychedelics.