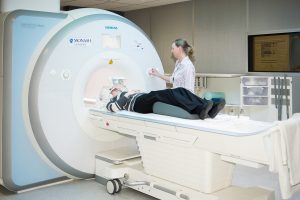 “The nature of the high noise levels present during fMRI makes total elimination of imager noise perceived by subjects impractical at this time.” – Michael Ravicz

Meditation training has been shown to improve health and well-being. It has also been found to be effective for a large array of medical and psychiatric conditions, either stand-alone or in combination with more traditional therapies. There are a number of ways that meditation practices produce these benefits, including changes to the brain and physiology.

The premiere way of measuring brain size and function is Magnetic Resonance Imaging (MRI). But the recording of the MRI can be difficult for the participant as they are confined in a narrow tube for an extended period of time with very high noise levels. There are attempts to mitigate the effects of this recording environment but even at best it is noxious for the participant. It is not known how this environment of MRI recording may affect the results of studies of meditation effects on the brain.

In today’s Research News article “Does the MRI/fMRI Procedure Itself Confound the Results of Meditation Research? An Evaluation of Subjective and Neurophysiological Measures of TM Practitioners in a Simulated MRI Environment.” (See summary below or view the full text of the study at: https://www.ncbi.nlm.nih.gov/pmc/articles/PMC7198852/ ) Travis and colleagues recruited experienced meditators and recorded their brain activity with electroencephalogram during a single session while they had their eyes closed and then meditated for 7 minutes. This sequence was repeated in counterbalanced order for sitting, lying down in the quiet, and lying down in a simulated MRI tube with 110db recording of the noise sound level of an MRI machine. The participants then completed a questionnaire about the depth of their meditation and their subjective experiences.

These findings are interesting and important for the interpretation of meditation research employing MRI to investigate its effects on the brain. The results suggest that the conditions of MRI recording, including confinement and loud noise levels alters the nature of the meditation and the brain’s responses to the meditation. This environment appears to interfere with the depth of the meditation and inserts greater distractions producing agitation. The MRI environment also appears to decrease the power of various waveforms in the EEG and activate the default mode network of the brain.

So, Magnetic Resonance Imaging (MRI) procedure can alter meditation and its effects on the brain.

“claustrophobia is common in the world of MRI. It’s so common that asking questions about it is standard in the pre-appointment screening call. “Four out of ten patients that we call will mention something about claustrophobia,” – Desiree Rckovich

Early research into meditation, including Transcendental Meditation (TM), relied exclusively on EEG to measure brain activity during meditation practice. Since the advent of neural imaging, MRI, and later fMRI, have dominated this field. Unfortunately, the use of this technology rests on the questionable assumption that lying down in a confining tube while exposed to very loud sounds would not interfere with the meditation practice. The present study was designed to assess the effects of the fMRI procedure on both the subjective and neurophysiological responses of short and long-term TM practitioners. Twenty-three TM practitioners volunteered to participate in this study: 11 short-term meditators, averaging 2.2 years practice, and 12 long-term meditators, averaging 34.8 years. The repeated-measures design included two activities for each participant, eyes-closed rest, and TM practice, in each of three conditions: sitting quietly in an upright position (normal TM practice); lying quietly in a supine position; and lying, with earplugs, inside a simulated fMRI tube (simMRI), while exposed to 110 dB recordings of an actual fMRI machine. Subjective experiences were collected after each activity in each condition. Physiological arousal was recorded using skin conductance levels. Scalp EEG was averaged into eight frequency bands within frontal and parietal leads; eLORETA software was used to explore the 3-D cortical distribution of EEG sources. During the simMRI condition, participants reported having more shallow meditation experiences, and greater agitation/distraction. Skin conductance levels paralleled self-reports, decreasing least during the simMRI condition. Frontal and parietal power decreased from sitting to simMRI in the alpha2 through gamma bands. Parietal power was higher during rest compared to TM in the alpha1 through beta2 bands. Frontal and parietal alpha1 coherence were highest during the simMRI condition. The eLORETA analysis revealed that the default mode network was more active during TM when sitting compared to the simMRI condition. The responses to the supine condition were generally between sitting and simMRI, with some significant exceptions. In conclusion, these data indicate that the fMRI procedure itself (high dB noise; lying down) strongly influences subjective and neurophysiological responses during meditation practice, and may therefore confound the interpretation of results from fMRI studies.