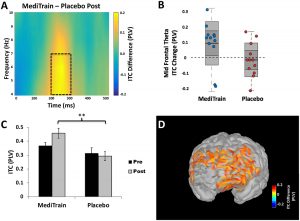 “The good news is that its possible to train your attention and gain the associated benefits, and practicing mindfulness offers one of the most accessible and effective approaches.” – Deborah Schoeberlein David

There has accumulated a large amount of research demonstrating that mindfulness has significant benefits for psychological, physical, and spiritual wellbeing. It even improves high level thinking known as executive function and emotion regulation and compassion. One of the primary effects of mindfulness training is an improvement in the ability to pay attention to the task at hand and ignore interfering stimuli. This is an important consequence of mindfulness training and produces improvements in thinking, reasoning, and creativity. The importance of heightened attentional ability to the individual’s ability to navigate the demands of complex modern life cannot be overstated. It helps in school, at work, in relationships, or simply driving a car. As important as attention is, it’s surprising that little is known about the mechanisms by which mindfulness improves attention.

There is evidence that mindfulness training improves attention by altering the brain. It appears That mindfulness training increases the size, connectivity, and activity of areas of the brain that are involved in paying attention. One way to observe the effects of meditation is to measure changes in the electroencephalogram (EEG), the rhythmic electrical activity that can be recorded from the scalp. The recorded activity can be separated into frequency bands. Theta activity consists of oscillations in the 4-8 cycles per second band and it thought to measure attention. Another method to observe attentional processing in the brain is to measure the changes in the electrical activity that occur in response to paying attention. These are called event-related potentials or ERPs. The signal following a stimulus changes over time. The fluctuations of the signal after specific periods of time are thought to measure different aspects of the nervous system’s processing of the stimulus. The P300 response in the evoked potential (ERP) is a positive going electrical response occurring between a 1.5 to 5.0 tenths of a second following the target stimulus presentation. The P300 component is thought to reflect attentional processes.

In today’s Research News article “Closed-loop digital meditation improves sustained attention in young adults.” (See summary below or view the full text of the study at: https://www.ncbi.nlm.nih.gov/pmc/articles/PMC7534732/ ) Ziegler and colleagues recruited meditation-naïve young adults and randomly assigned them to a placebo control group or to receive 6 weeks of daily online breath following focused meditation training. Initially they meditated for 20 minutes but as they reported greater and greater ability to pay attention to their breath the duration of the meditation increased up to 30 minutes. The placebo control condition was engagement with an online app that was judged by participants to produce expectations equivalent to the meditation app for improvements in sustained attention and working memory. Three online aps were identified and self-selected by the participants of foreign language learning, Tai Chi practice, or logic games. The participants were measured before and after training for sustained attention, distraction filtering, working memory, and accuracy of working memory. They also recoded the electroencephalogram (EEG) during the sustained attention task and recorded the theta rhythm and the P300 evoked potentials to the attention stimuli.

Previous studies have shown that mindfulness practices produce improvements in attention and memory. An interesting and important difference between this research and prior research is that they employed a control condition that was demonstrated to produce the same degree of expectation in the participants for improvement in attention and memory. In other words. they controlled for participant expectancy, placebo, effects that were not controlled in the prior work. So, the improvements in attention and working memory were likely due to the meditation practice itself. Another interesting difference was that the present results were both in behavioral and brain activity measures. This demonstrates that the effects can be seen in objective, EEG and evoked potential data, and not just in behavioral responses that are more susceptible to bias.

So, improve attention and memory with closed-loop digital meditation.

Attention is a fundamental cognitive process that is critical for essentially all aspects of higher-order cognition and real-world activities. Younger generations have deeply embraced information technology and multitasking in their personal lives, school, and the workplace, creating myriad challenges to their attention. While improving sustained attention in healthy young adults would be beneficial, enhancing this ability has proven notoriously difficult in this age group. Here we show that six-weeks of engagement with a meditation-inspired, closed-loop software program (MediTrain) delivered on mobile devices led to gains in both sustained attention and working memory in healthy young adults (n = 22). These improvements were associated with positive changes in key neural signatures of attentional control (frontal theta inter-trial coherence and parietal P3b latency), as measured by electroencephalography. Our findings suggest the utility of delivering aspects of the ancient practice of focused-attention meditation in a modern, technology-based approach and its benefits on enhancing sustained attention.