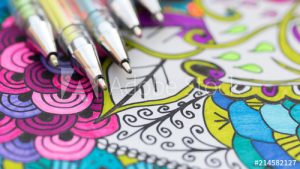 “Mandala means “sacred circle” in Sanskrit, which is a traditional concept employed in meditation and a ritual symbol that represents the universe in Hinduism and Buddism. Today, Mandala has evolved into a powerful art therapy exercise that allows the creator to enjoy some peace and quiet by simply crafting colourful geometric patterns within a circular shape. “ – Helen Yu

In today’s Research News article “Cooperative and Individual Mandala Drawing Have Different Effects on Mindfulness, Spirituality, and Subjective Well-Being.” (See summary below or view the full text of the study at: https://www.frontiersin.org/articles/10.3389/fpsyg.2020.564430/full?utm_source=F-AAE&utm_medium=EMLF&utm_campaign=MRK_1456740_69_Psycho_20201013_arts_A ) Liu and colleagues recruited healthy college students and randomly assigned them to mandala drawing either alone (individual) or in groups of 4 (cooperative). They met for 5 weekly, 90-minute sessions in which they received training and drew mandalas in provided blank circles. They were measured before and after practice for mindfulness, spirituality, subjective well-being, satisfaction with life, and positive and negative emotions.

These results are interesting and demonstrate that mandala drawing is beneficial for the psychological health and spirituality of participants. It does not appear that mindfulness mediates these effects as there was no increase in mindfulness produced by either individual or cooperative mandala drawing.

The results show that mandala drawing in a cooperative, group, format produces superior benefits to those produced by individual mandala drawing, including more positive emotions and greater subjective well-being. Since participating in a group can be more fun it would be expected that positive emotions would increase further and the group socialization would reduce loneliness and produce greater subjective well-being. So, it would appear that mandala drawing is beneficial by itself but adding a social component increases the benefits.

So, improve well-being with mandala drawing.

“Each person’s life is like a mandala – a vast limitless circle. We stand in the centre of our own circle, and everything we see, hear and think forms the mandala of our life… everything that shows up in your mandala is a vehicle for your awakening.” ―Pema Chödrön

Mandala drawing was first practiced by Tibetan buddhists and then developed by Carl Gustav Jung, who felt certain that mandala drawing has the function of integrating psychological division, enhancing psychological harmony, and preserving personality integrity. Previous studies on mandala drawing have mainly focused on alleviating people’s negative emotions, such as anxiety and depression. Therefore, this study explored the effect and mechanism of mandala drawing on the improvement of subjective well-being (SWB), mindfulness, and spirituality from positive psychology’s viewpoint and compared the different effects of cooperative mandala drawing (CMD) and individual mandala drawing (IMD) on mindfulness, spirituality, and SWB. A total of 76 students were recruited from Chang Gung University, and the aforementioned three main variables were measured before and after the coloring experiment. The results indicated that both CMD and IMD significantly enhanced the subjects’ spirituality. Compared with IMD, CMD has a more significant improvement and promotion effect on SWB of subjects by affecting PA, while IMD had no significant effect on PA, and the enhancement effect of SWB was weaker than that of CMD. Mindfulness, spirituality, and SWB all positively correlated with each other. This study highlights the mechanism of mandala drawing and the theoretical understanding of the relationship between mindfulness and SWB. Mandala drawing especially CMD has a positive effect on spirituality and SWB, which may provide individuals with a simple and easy method to improve their happiness.