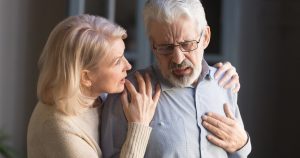 Cardiovascular disease is the number one killer. A myriad of treatments have been developed for heart disease including a variety of surgical procedures and medications. In addition, lifestyle changes have proved to be effective including quitting smoking, weight reduction, improved diet, physical activity, and reducing stresses. Unfortunately, for a variety of reasons, 60% of cardiovascular disease patients decline to alter these lifestyle factors, making these patients at high risk for another attack.

Congestive heart failure (CHF) is a major type of cardiovascular disease. “CHF is a chronic progressive condition that affects the pumping power of your heart muscles. While often referred to simply as “heart failure,” CHF specifically refers to the stage in which fluid builds up around the heart and causes it to pump inefficiently” (Healthline). Heart failure is a very serious life-threatening condition. About 5.7 million adults in the United States have congestive heart failure. One in 9 deaths include heart failure as a contributing cause. The seriousness of heart failure is underscored by the fact that about half of people who develop heart failure die within 5 years of diagnosis. Hence, effective treatment is very important. Spirituality, a sense of inner peace and harmony, and religiosity are known to help with a wide range of physical and psychological problems. So, it would make sense to investigate the relationship of spirituality and religiosity to the symptoms of heart failure.

In today’s Research News article “Is Belonging to a Religious Organization Enough? Differences in Religious Affiliation Versus Self-ratings of Spirituality on Behavioral and Psychological Variables in Individuals with Heart Failure.” (See summary below or view the full text of the study at: https://www.ncbi.nlm.nih.gov/pmc/articles/PMC7349115/) Saiz and colleagues recruited heart failure patients who had the diagnosis for at least 3 months. They completed measures of religious affiliation, spirituality, anxiety, depression, positive and negative emotions, anger, satisfaction with life, physical symptoms, sleep, fatigue, and self-efficacy for people with heart disease.

They found that spirituality was associated with significantly lower anxiety, depression, negative emotions, anger, and fatigue, and higher levels of positive emotions, sleep quality, satisfaction with life, and self-efficacy. There were no significant differences on these measures between patients who were affiliated with a religion and those that were not.

The study was correlational and as such caution must be exercised in drawing causal conclusions. Nevertheless, the results clearly show that heart failure patients who are spiritual have significantly better psychological and physical well-being than those who were not spiritual. Interestingly, simply being religious did not make a difference. The important factor was spirituality.

For the present study spirituality is defined as “a complex and multidimensional part of the human experience-our inner belief system. It helps individuals search for the meaning and purpose of life, and it helps them experience hope, love, inner peace, comfort, and support, being the experiences of meaning in life and connectedness, spirituality’s central elements.” It would appear that providing meaning in life and connectedness are very important for heart failure patients. Heart failure can make one’s mortality very clear. Spirituality but not religiosity would appear to help in dealing with the psychosocial consequences of this realization.

So, spirituality but not religious affiliation is associated with well-being in heart failure patients.

“The present qualitative research showed that spirituality is a key for patients with chronic heart failure to better cope with the disease and deal with their multiple problems.” – Parvin Mangolian Shahrbabaki

In the United States, heart failure (HF) affects approximately 6.5 million adults. While studies show that individuals with HF often suffer from adverse symptoms such as depression and anxiety, studies also show that these symptoms can be at least partially offset by the presence of spiritual wellbeing. In a sample of 327 men and women with AHA/ACC classification Stage B HF, we found that more spirituality in patients was associated with better clinically-related symptoms such as depressed mood and anxiety, emotional variables (affect, anger), well-being (optimism, satisfaction with life), and physical health-related outcomes (fatigue, sleep quality). These patients also showed better self-efficacy to maintain cardiac function. Simply belonging to a religious organization independent of spiritualty, however, was not a reliable predictor of health-related benefits. In fact, we observed instances of belonging to a religious organization unaccompanied by parallel spiritual ratings, which appeared counterproductive.