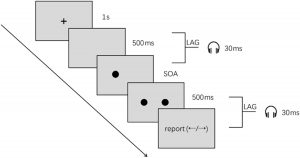 We have a bias to notice things occurring on the left first. This is probably due to our training with words and numbers to pay attention first to the leftmost character. But this produces a perceptual bias when looking at two events occurring very close in time producing a tendency to see the leftmost stimulus as occurring first even when they occur at the first time. Mindfulness has been shown to alter time perception. It has also been shown to enhance attention which could also alter time perception. It is not known, however, if mindfulness training might alter the left to right bias in perception.

In today’s Research News article “Mindfulness Meditation Biases Visual Temporal Order Discrimination but Not Under Conditions of Temporal Ventriloquism.” (See summary below or view the full text of the study at: https://www.frontiersin.org/articles/10.3389/fpsyg.2020.01937/full?utm_source=F-AAE&utm_medium=EMLF&utm_campaign=MRK_1401267_69_Psycho_20200811_arts_A) Tian and colleagues recruited healthy adults and randomly assigned them to receive either mindfulness training or to a wait-list control condition. Mindfulness training consisted of 8 weekly 2.5-hour sessions including discussion, walking and sitting meditation, body scan, and yoga along with daily 30-minute practice.

Before and after training they participated in a temporal order perception task in which two disks were visually presented at the same time of separated in time by either 50, 100, or 150 milliseconds. Half the time the left disk was first and half the right disk was first. These were presented under 3 conditions, visually only, accompanied with beeps, or with a beep 50 milliseconds before the first disk and 50 milliseconds after the second disk.

There is a normal left to right tendency such that people have a bias to see the disk on the left side as being first. This bias was amplified by mindfulness training. They found that after mindfulness training there was a significantly greater tendency to see the left disk as first. In addition, the greater the mindfulness facet of acting with awareness the greater the increase in the bias. Interesting, the difference disappeared when the beeps were present either synchronously with the disks or preceded and followed the disks by 50 milliseconds.

“The subjective experience of an acceleration of time arises partially from the fact that the cognitive resources are fully occupied by the realization of the mindfulness activity.” – Sylvie Droit-Volet

This study examined how cognitive plasticity acquired from a long (8 weeks) course of mindfulness training can modulate the perceptual processing of temporal order judgment (TOJ) on a sub-second scale. Observers carried out a TOJ on two visual disks, with or without concurrent paired beeps. A temporal ventriloquism paradigm was used in which the sound beeps either were synchronized with the two disks or bracketed the visual stimuli by leading the first disk by 50 ms and lagging the other by 50 ms. A left-to-right bias in TOJ was found under the visual-only condition after mindfulness training. This bias was positively correlated with “acting with awareness,” a factor in the Five Facet Mindfulness Questionnaire, showing that awareness of every moment and enhanced attention focus magnify the left-to-right bias. However, the effect of mindfulness training may be short-lived and was not present when attention was diverted by auditory events in the cross-modal temporal ventriloquism illusion.