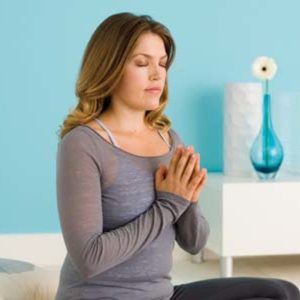 “Even a few minutes of meditation everyday can give you the space you need to reflect on your anxiety, calm your nerves, and allow you to create a retreat away from hectic modern life.” – Natural Anxiety Meds

Anxiety at low levels is normal and can act to signal potential future danger. But when it is overwhelming it creates what we label as anxiety disorders. They are the most common mental illness in the United States, affecting 40 million adults, or 18% of the population. A characterizing feature of anxiety disorders is that the suffer overly identifies with and personalizes their thoughts. The sufferer has recurring thoughts, such as impending disaster, that they may realize are unreasonable, but are unable to shake. It has been estimated that one out of every three absences at work are caused by high levels of anxiety. Also, it has been found to be the most common reason for chronic school absenteeism. In addition, people with an anxiety disorder are three-to-five times more likely to go to the doctor and six times more likely to be hospitalized for psychiatric disorders than non-sufferers, making it a major burden on the healthcare system.

Anxiety disorders have generally been treated with drugs. But there are considerable side effects and these drugs are often abused. There are a number of psychological therapies for anxiety. But, about 45% of the patients treated do not respond to the therapy. So, there is a need to develop alternative treatments. Recently, it has been found that mindfulness improves the regulation of  all emotions, including negative emotions like anxiety. There are a large variety of mindfulness meditation practices. So, it is important to examine the effectiveness of different mindfulness meditation practices on anxiety.

In today’s Research News article “Effect of anapanasati meditation on anxiety: a randomized control trial.” (See summary below or view the full text of the study at: https://www.ncbi.nlm.nih.gov/pmc/articles/PMC6894628/) Sivaramappa and colleagues recruited healthy adults and randomly assigned them to either receive a 6-month program of once a day, 6 days per week, for 1 hour anapanasati (breath following) meditation or to a no-treatment control group. The participants completed a measure of anxiety levels before and after the 6-month treatment period.

These results replicate the common finding that mindfulness training reduces anxiety levels. The present study demonstrated that a particular form of focused meditation practice, anapanasati (breath following) meditation, was effective in lowering anxiety particularly in older participants and those who had high anxiety levels at the start of the study. This improves our understanding of meditation effects on anxiety.

“Breathing exercises are an effective, quick, and easy solution for stress and anxiety relief. Proper breathing techniques work on anxiety on a physiological level by automatically slowing your heart rate. The effect on anxiety is almost instant.” – Alice Boyes

Meditation has shown positive results in improving the psychological disorders such as anxiety. There is a need to study the therapeutic benefits of Anapanasati meditation, a mindfulness meditation technique.

The study aims at investigating the effect of Anapanasati meditation on individuals with moderate anxiety.

This study has shown that after six months of intervention, the subjects with moderate anxiety who practiced Anapanasati meditation had a significant decrease in their STAI score and the control group has not shown significant change in the STAI score.