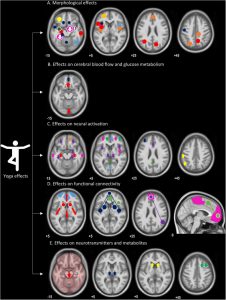 “Similar to the effects of meditation, yoga is a neurological vacation – but it also awakens parts of the brain that are typically inactive during normal day-to-day activity. . . The mind becomes deeply intertwined with the body and the two become one – opening up the flow of communication.” – Morgan Garza

The practice of yoga has many benefits for the individual’s physical and psychological health. Yoga has diverse effects because it is itself diverse having components of exercise, mindfulness meditation, and spirituality. So, yoga nourishes the body, mind, and spirit. As a result, yoga practice would be expected to produce physical changes. These include the relaxation response and stress relief. These should be obvious in the muscles, tendons and joints, but, less obvious in the nervous system. The nervous system changes in response to how it is used and how it is stimulated in a process called neuroplasticity. Highly used areas grow in size and connectivity. Mindfulness practices in general are known to produce these kinds of changes in the structure, connectivity, and activity of the brain. Indeed, yoga practice has been shown to protect the brain from age related degeneration.

The research on yoga effects on the nervous system is accumulating. It makes sense to pause and look at what has been learned. In today’s Research News article “What Has Neuroimaging Taught Us on the Neurobiology of Yoga? A Review.” (See summary below or view the full text of the study at: https://www.ncbi.nlm.nih.gov/pmc/articles/PMC7362763/) van Aalst and colleagues review and summarize 34 published research studies of the effects of yoga practice on the brain. The studies mainly included healthy adults.

They report that the published research studies used a wide variety of different yoga practices and as a result there were differences in the reported changes to the brain. Regardless, there were a number of similarities in the changes. They report that yoga practice increased the volume of brain areas especially the insular cortex and the hippocampus. Studies of activation of the brain have demonstrated that yoga produces increased activation of prefrontal cortical areas. Finally, studies of connectivity of brain areas have demonstrated that yoga practice increases functional connectivity in a series of brain areas that are known as the default mode network.

“We can talk about anxiety, depression and blood pressure lowering in yoga, all of those are proven. But the biggest thing we see that results from yoga is that your quality of life will change for the better,” – Amy Wheeler

Yoga is becoming increasingly popular worldwide, with several implicated physical and mental benefits. Here we provide a comprehensive and critical review of the research generated from the existing neuroimaging literature in studies of yoga practitioners. We reviewed 34 international peer-reviewed neuroimaging studies of yoga using magnetic resonance imaging (MRI), positron emission tomography (PET), or single-photon emission computed tomography (SPECT): 11 morphological and 26 functional studies, including three studies that were classified as both morphological and functional. Consistent findings include increased gray matter volume in the insula and hippocampus, increased activation of prefrontal cortical regions, and functional connectivity changes mainly within the default mode network. There is quite some variability in the neuroimaging findings that partially reflects different yoga styles and approaches, as well as sample size limitations. Direct comparator groups such as physical activity are scarcely used so far. Finally, hypotheses on the underlying neurobiology derived from the imaging findings are discussed in the light of the potential beneficial effects of yoga.