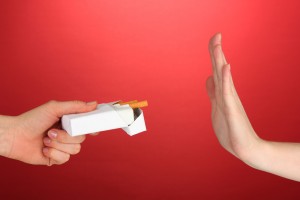 One problem is that nicotine is one of the most addictive substances known and withdrawal from nicotine is very stressful, producing many physical and psychological problems, including negative emotional states and depression. In essence, the addict feels miserable without the nicotine. This promotes relapse to relieve the discomfort. Better methods to quit which can not only promote quitting but also prevent relapse are badly needed. Mindfulness practices have been found to be helpful in treating addictions, including nicotine addiction, and reducing the risk of relapse.

In today’s Research News article “Mechanisms linking mindfulness and early smoking abstinence: An ecological momentary assessment study.” (See summary below or view the full text of the study at: https://www.ncbi.nlm.nih.gov/pmc/articles/PMC6483850/), Spears and colleagues recruited adult smokers desiring to quit and provided them with “six smoking cessation counseling sessions (10–20 minutes each).” They completed questionnaires on demographics and mindfulness. They were also asked to complete assessments at baseline and for 4 weeks after cessation of smoking on a smartphone of positive and negative emotions, smoking urges, and expectancy of regulating emotions whenever they had an urge to smoke, smoked a cigarette, and 4 randomly selected times per day prompted on their smartphone.

Even though the smoking cessation therapy did not include a mindfulness component, the participant’s level of mindfulness was an important contributor to successful smoking abstinence. Mindfulness appeared to be associated with improved mood and lower stress levels and urges to smoke which were in turn associated with improved outcomes. Hence, mood and stress appear to mediate the association of mindfulness with successfully quitting smoking. Mindful people appear to have more positive moods which works to improve the likelihood of quitting smoking.

So, improve smoking abstinence with mindfulness.

“stress is caused by craving. If you can let go of that craving, then your stress will dissolve, and practicing mindfulness is the way to do that.” – Judson Brewer