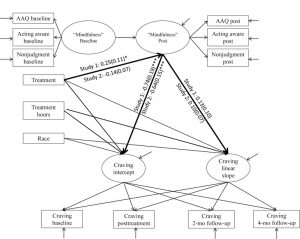 “when people cultivate mindfulness, they’re developing a tool to become aware of that inclination to want only pleasurable things and escape uncomfortable things.” – Sarah Bowen

Substance abuse is a major health and social problem. There are estimated 22.2 million people in the U.S. with substance dependence. It is estimated that worldwide there are nearly ¼ million deaths yearly as a result of illicit drug use which includes unintentional overdoses, suicides, HIV and AIDS, and trauma. Obviously, there is a need to find effective methods to prevent and treat substance abuse. There are a number of programs that are successful at stopping the drug abuse, including the classic 12-step program emblematic of Alcoholics Anonymous. Unfortunately, the majority of drug and/or alcohol abusers relapse and return to substance abuse. Hence, it is important to find an effective method to treat substance abuse and prevent relapse.

An effective treatment for addiction has been elusive. Most programs and therapies to treat addictions have poor success rates. Recent research is indicating that mindfulness has been found to be effective in treating addictions. One way that mindfulness may produce these benefits is by reducing cravings. Mindfulness-based Relapse Prevention (MBRP) has been developed to specifically assist in relapse prevention and has been shown to be effective. “MBRP integrates mindfulness practices with cognitive-behavioral Relapse Prevention therapy and aims to help participants increase awareness and acceptance of difficult thoughts, feelings, and sensations to create changes in patterns of reactive behavior that commonly lead to relapse. Mindfulness training in MBRP provides clients with a new way of processing situational cues and monitoring internal reactions to contingencies, and this awareness supports proactive behavioral choices in the face of high-risk relapse situation.” – Grow et al. 2015.

In a previous study it was reported that Mindfulness-based Relapse Prevention (MBRP) improved mindfulness which in turn resulted in reduced cravings. In today’s Research News article “The (Lack of) Replication of Self-Reported Mindfulness as a Mechanism of Change in Mindfulness-Based Relapse Prevention for Substance Use Disorders.” (See summary below or view the full text of the study at: https://www.ncbi.nlm.nih.gov/pmc/articles/PMC6435335/), Hsiao and colleagues attempted to replicate their previous findings of mindfulness as a mediator between MBRP and reduced cravings. They recruited adults who had completed intensive treatment for cessation of alcohol or drug abuse in the prior 2 weeks. The patients were randomly assigned to receive either treatment as usual or 8 weekly 2-hour sessions of Mindfulness-based Relapse Prevention (MBRP). They were measured before and after training and 2 and 4 months later for acceptance, mindfulness and drug or alcohol cravings.

In a previous, virtually identical study, they had found that in comparison to baseline and treatment as usual Mindfulness-based Relapse Prevention (MBRP) resulted in significantly increased mindfulness and acceptance and decreased cravings. They also found that mindfulness mediated the effect of MBRP on cravings such that MBRP increased mindfulness which in turn decreased cravings. But in the present study MBRP did not increase mindfulness and acceptance and did not decrease cravings and there was no significant mediation.

These were surprising results. The previous study was highly significant with moderate effect sizes. They hypothesized that part of the failure to replicate the prior results may have been due to the increased acceptance of mindfulness in the therapeutic community over the years. They speculated that mindfulness may have been incorporated in the therapy included in treatment as usual in the present study whereas it wasn’t in the prior study. More research is needed to examine this possibility.

It should be noted that the effectiveness of mindfulness in producing benefits has been replicated multiple times in other domains. Thus, the results underline the need for replication of published results in the studies of mindfulness and addiction. They may be more fragile than thought.

“One of the biggest challenges of recovering from addiction is dealing with cravings. . . Being mindful in a craving means seeing the craving for what it really is and really experiencing it. . . Once you can accept that a craving is just a feeling and the object of the craving will never deliver on that promise, you will be able to regain some control.” – Recovery Ways

The development and evaluation of mindfulness-based interventions for a variety of psychological and medical disorders has grown exponentially over the past 20 years. Yet, calls for increasing the rigor of mindfulness research and recognition of the difficulties of conducting research on the topic of mindfulness have also increased. One of the major difficulties is the measurement of mindfulness, with varying definitions across studies and ambiguity with respect to the meaning of mindfulness. There is also concern about the reproducibility of findings given few attempts at replication. The current secondary analysis addressed the issue of reproducibility and robustness of the construct of self-reported mindfulness across two separate randomized clinical trials of mindfulness-based relapse prevention (MBRP), as an aftercare treatment for substance use disorder. Specifically, we tested the robustness of our previously published findings, which identified a latent construct of mindfulness as a significant mediator of the effect of MBRP on reducing craving following treatment. First, we attempted to replicate the findings in a separate randomized clinical trial of MBRP. Second, we conducted sensitivity analyses to test the assumption of the no-omitted confounder bias in a mediation model. The effect of MBRP on self-reported mindfulness and overall mediation effect failed to replicate in a new sample. The effect of self-reported mindfulness in predicting craving following treatment did replicate and was robust to the no-omitted confounder bias. The results of this work shine a light on the difficulties in the measurement of mindfulness and the importance of examining the robustness of findings.