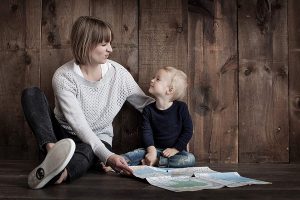 Improve Mothers and Children with Autism with Mindfulness

“Parents of children with autism spectrum disorder (ASD) often experience high stress in the form of psychological problems, marital strain, and/or family interaction difficulties. . . Mindfulness-based interventions have been found to be beneficial for these parents in many ways, such as decreasing their levels of depression, stress, and emotional reactivity . . . Additionally, many parents of children with ASD who engage in a mindfulness-based practice see a decrease in their child’s aggression and challenging behaviors and an improvement in the child’s overall functioning.” – Katy Oberle

Autism spectrum disorder (ASD) is a developmental disability that tends to appear during early childhood and affect the individual throughout their lifetime. It affects a person’s ability to communicate, and interact with others, delays learning of language, makes eye contact or holding a conversation difficult, impairs reasoning and planning, narrows and intensifies interests, produces poor motor skills and sensory sensitivities, and is frequently associated with sleep and gastrointestinal problems. ASD is a serious disorder that impairs the individual’s ability to lead independent lives including complete an education, enter into relationships or find and hold employment. Mindfulness training has been shown to be helpful in treating ASD.

Providing care for children with autism can be particularly challenging. These children’s behavior is characterized, in varying degrees, by difficulties in social interaction, verbal and nonverbal communication and repetitive behaviors. These make it difficult to relate to the child and receive the kind of positive feelings that often help to support caregiving. The challenges of caring for a child with autism require that the parent be able to deal with stress, to regulate their own emotions, and to be sensitive and attentive to their child. These skills are exactly those that are developed in mindfulness training. It improves the psychological and physiological responses to stress. It improves emotion regulation. And it improves the ability to maintain attention and focus in the face of high levels of distraction.

In today’s Research News article “A Component Analysis of the Mindfulness-Based Positive Behavior Support (MBPBS) Program for Mindful Parenting by Mothers of Children with Autism Spectrum Disorder.” (See summary below or view the full text of the study at: https://www.ncbi.nlm.nih.gov/pmc/articles/PMC7223597/), Singh and colleagues examine the ability of mindful parenting to improve children with autism and their parents. They recruited mothers of children with Autism spectrum disorder (ASD). After a 10-week preintervention control period the mothers were randomly assigned to receive training for 3 days followed by 30 weeks of practice of either Mindfulness-Based Positive Behavior Support (MBPBS), mindfulness and meditation, or Positive Behavior Support (PBS). PBS involved instruction on how to positively manage their children’s behavior. They were measured before and after the intervention and yearly for 3 years following the intervention for perceived stress and amount of meditation practice and the children’s’ aggressive behaviors, disruptive behaviors, and compliance with mothers’ instructions.

They found that in comparison to baseline all groups had significant decreases in the mothers, perceived stress and the children’s aggressive behaviors and disruptive behaviors and significant increases in the children’ compliance with mothers’ instructions that was maintained over the 3-year follow-up period. But the group receiving Mindfulness-Based Positive Behavior Support (MBPBS) had significantly greater improvements in these measures than the mindfulness only group which in turn had significantly greater improvements than the Positive Behavior Support (PBS) group.

The levels of effectiveness of the combined Mindfulness-Based Positive Behavior Support (MBPBS) were quite remarkable with the children’s aggressive and disruptive behaviors almost reduced to zero and this compliance with the mothers’ instructions nearly doubled. The fact that these benefits last over 3 years is quite remarkable. As such MBPBS training should be recommended for mothers of children with autism spectrum disorder.

So, improve mothers and children with autism with mindfulness.

“mindful parenting can affect not just you and reduce your own stress, but it can also help your children, as well.” – A. Stout

Mindfulness-Based Positive Behavior Support (MBPBS) has been shown to be effective in reducing stress and burnout in parents and professional caregivers of children and adolescents with intellectual and developmental disabilities (IDD) and autism spectrum disorder (ASD). The aim of this study was to assess the comparative effects of the mindfulness (MB) and positive behavior support (PBS) components against the MBPBS program for mindful parenting.

The study utilized a three-arm randomized controlled trial design, with a 10-week pre-treatment control condition, 30 weeks of intervention, and 3 years of post-intervention follow-up. Mothers of children with ASD were randomly assigned to the MB, PBS, and MBPBS conditions and provided 3 days of training specific to each condition. The effects of these programs were assessed on the mothers (i.e., training attendance, meditation time, perceived psychological stress) and spillover effects were assessed on their children with ASD (i.e., aggression, disruptive behavior, compliance with mothers’ requests).

Mothers in the MBPBS condition reported greater reductions in perceived psychological stress, followed by those in the MB condition, and with no significant changes reported by those in the PBS condition. Reduction in the children’s aggression and disruptive behavior followed a similar pattern, with most to least significant reductions being in MBPBS, MB, and PBS condition, respectively. Significant increases in compliance (i.e., responsiveness to mothers’ requests) were largest in the MBPBS condition, followed by MB, and then PBS. Changes across all variables for both mothers and their children were maintained for 3 years post-intervention. After time and training type were controlled for, meditation time was a significant predictor in reducing aggressive and disruptive behaviors, and in enhancing compliance of the children with mothers’ requests.

Positive outcomes for mothers and their children with ASD were significantly greater in the MBPBS condition, followed by the MB condition, and least in the PBS condition. MBPBS appears to be an effective mindful parenting program on the assessed variables.