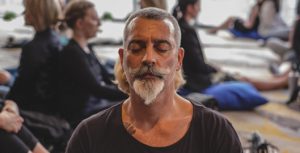 “It hasn’t affected the tinnitus… It’s the way I think about it and the way I deal with it… knowing that in just a few moments it won’t be as bad… you have to accept that it’s there, you have to.” – Study Participant

Tinnitus is one of the most common symptoms to affect humanity. People with tinnitus live with a phantom noise that can range from a low hiss or ringing to a loud roar or squeal which can be present constantly or intermittently. It can have a significant impact on people’s ability to hear, concentrate, or even participate in everyday activities. The vast majority of people with tinnitus have what is known as subjective tinnitus. This is caused by unknown problems somewhere in the auditory system; the inner, middle, or outer ear, the part of the brain that translates nerve signals as sounds, or the auditory nerves.

Approximately 25 million to 50 million people in the United States experience it to some degree. Approximately 16 million people seek medical attention for their tinnitus, and for up to two million patients, debilitating tinnitus interferes with their daily lives. There are a number of treatments for tinnitus including, counseling, sound therapy, drugs, and even brain stimulation. Unfortunately, none of these treatments is very effective. Mindfulness practices have been shown to be effective in treating Tinnitus. How learning to be mindful affects tinnitus is unknown.

In today’s Research News article “I Wasn’t at War With the Noise: How Mindfulness Based Cognitive Therapy Changes Patients’ Experiences of Tinnitus.” (See summary below or view the full text of the study at: https://www.frontiersin.org/articles/10.3389/fpsyg.2020.00483/full?utm_source=F-AAE&utm_medium=EMLF&utm_campaign=MRK_1313244_69_Psycho_20200428_arts_A), Marks and colleagues recruited adults with tinnitus who participated in a study of the effectiveness of Mindfulness-Based Cognitive Therapy (MBCT) for tinnitus. They were questioned with semi-structured interviews on the MBCT program and its effects on themselves and their tinnitus. The interview responses were analyzed with Interpretative Phenomenological Analysis.

The previous study that the subjects participated in demonstrated that Mindfulness-Based Cognitive Therapy (MBCT) significantly reduced tinnitus severity, catastrophizing, and fear and significantly increased their acceptance of tinnitus. The participants responses in the structured interviews were found to reflect 4 different themes. First, they reported that they learned to relate to tinnitus in a new way, specifically to cease fighting and attempting to control their tinnitus and instead to allow and accept it and turn toward it. Second, MBCT reduced their emotional distress and improved their well-being. Third, MBCT improved their relationships with others and themselves increasing understanding and compassion. Finally, MBCT improved attitudes that supported change including open mindedness, motivation, and balancing realism with gentleness.

These results suggest that Mindfulness-Based Cognitive Therapy (MBCT) improved tinnitus symptoms by changing the subjects attitudes and perspective. This is exactly what MBCT is designed to do. MBCT involves mindfulness training and cognitive therapy that attempts to teach patients to distinguish between thoughts, emotions, physical sensations, and behaviors, and to recognize irrational thinking styles and how they affect behavior. It would appear from the participants’ reports that the training indeed was effective in changing how they experienced and related to their tinnitus and this, in turn, improved their symptoms.

“the rest of me has benefitted… You can’t catastrophize over everything else but manage it with your tinnitus. So it’s holistic… the big thing is the not catastrophizing…” – Study Participant

Objectives: Intrusive tinnitus is a challenging, life-changing experience for which traditional medical treatment does not yet have a cure. However, Mindfulness Based Cognitive Therapy for tinnitus (MBCT-t) is effective in reducing tinnitus-related distress, disability and intrusiveness. It is a priority to understand patients’ experience of MBCT-t and active processes which they regarded as underpinning the changes they experienced. Semi-structured interviews were conducted 6 months after participants had completed MBCT as part of a randomized controlled trial (RCT), with a focus on exploring their experiences of the course, what they felt had changed and how they felt such changes had occurred.

Conclusion: All participants reported benefits from MBCT-t, based on a radically new relationship with tinnitus. It was no longer characterized by “fighting it” and was instead based on “allowing” tinnitus to be present. Changes were supported by the development of open, stable, present-moment awareness and attitudes of equanimity, kindness, and compassion. Practices encouraging focus on sound (including tinnitus) were challenging, but essential to learning this new way of being with tinnitus. MBCT-t had a huge range of benefits including reduced distress and enhanced wellbeing. The group nature of MBCT-t was an integral part of the therapeutic process. A number of clinical and research implications are discussed.