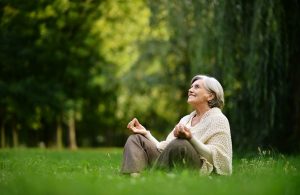 “Mindfulness practice was not directly linked to lower inflammation levels, but may have bolstered stress resilience among at-risk adults by preventing an increase in inflammatory biomarker levels.” – Grace Bullock

The immune system is designed to protect the body from threats like stress, infection, injury, and toxic chemicals. One of its tools is the Inflammatory response. This response works quite well for short-term infections and injuries. But when inflammation is protracted and becomes chronic, it can itself become a threat to health. It can produce autoimmune diseases such as colitis, Chron’s disease, arthritis, heart disease, increased cancer risk, lung disease, sleep disruption, gum disease, decreased bone health, psoriasis, and depression. In the elderly it is associated with the onset of dementia.

In today’s Research News article “Mindfulness improves inflammatory biomarker levels in older adults with mild cognitive impairment: a randomized controlled trial.” (See summary below or view the full text of the study at: https://www.ncbi.nlm.nih.gov/pmc/articles/PMC7026149/), Ng and colleagues recruited elderly (> 60 years of age) who had mild cognitive impairment but not dementia and randomly assigned them to receive once a week for 1 hour for 12 weeks of either health education or mindfulness awareness practice. For the next 6 months they received monthly booster sessions. The mindfulness awareness practice was based upon the Mindfulness-Based Stress Reduction (MBSR) program adapted for the elderly. The participants were also instructed to practice daily at home. Before and after training and 6 months later the participants contributed blood samples that were assayed for inflammatory biomarkers of high-sensitivity (hs)-CRP, BDNF, and DHEA-S. They also contributed salivary samples that were assayed for the inflammatory biomarkers of cortisol, IL-1β, and IL-6.

So, reduce inflammation in mildly cognitive impaired elderly with mindfulness.

“Meditation is associated with many psychological and physical benefits. “In general, it’s been shown to decrease blood pressure and inflammation.” – Heidi Goldman

Few randomized controlled trials investigated the effects of mindfulness intervention on older adults diagnosed with mild cognitive impairment (MCI). Furthermore, there have been hypotheses and theoretical mechanisms on the benefits of mindfulness intervention on biomarkers of stress, inflammation, and neuroplasticity implicated in MCI that warrant empirical evidence. We conducted a pilot randomized controlled trial to examine whether Mindful Awareness Practice (MAP) improved biomarker levels in older adults with MCI. Fifty-five community-dwelling older adults aged 60 and above were randomized into either the treatment arm, MAP, or the active control arm, the health education program (HEP). Researchers who were blinded to treatment allocation assessed the outcomes at baseline, 3-month, and 9-month follow-ups. Linear-mixed models were used to examine the effect of MAP on biomarker levels. MAP participants had significantly decreased high-sensitivity c-reactive protein (hs-CRP) levels at 9-month (β = −0.307, 95% CI = −0.559 to −0.054 P = 0.018). Exploratory sub-group analyses by sex showed significantly decreased hs-CRP in females only (β = −0.445, 95% CI = −0.700 to −0.189, P = 0.001), while stratification by MCI subtype showed hs-CRP decreased only in amnestic-MCI (aMCI) (β = −0.569, 95% CI = −1.000 to −0.133, P = 0.012). Although total sample analyses were not significant, males had significantly decreased interleukin (IL)−6 (β = −1.001, 95% CI = −1.761 to −0253, P = 0.011) and IL-1β (β = −0.607, 95% CI = −1.116 to −0.100, P = 0.021) levels at 3-month and non-significant improvements at 9-month time-point. MAP improved inflammatory biomarkers in sex- and MCI subtype-specific manners. These preliminary findings suggest the potential of mindfulness intervention as a self-directed and low-cost preventive intervention in improving pathophysiology implicated in MCI.