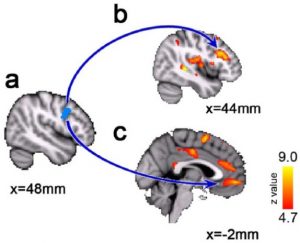 Improve Emotion Processing by the Brain with Meditation

There has accumulated a large amount of research demonstrating that meditation practice has significant benefits for psychological, physical, and spiritual wellbeing. It has been shown to improve emotions and their regulation. Practitioners demonstrate more positive and less negative emotions and the ability to fully sense and experience emotions, while responding to them in appropriate and adaptive ways. In other words, mindful people are better able to experience yet control their responses to emotions. The ability of mindfulness training to improve emotion regulation is thought to be the basis for a wide variety of benefits that mindfulness provides to mental health and the treatment of mental illness especially depression and anxiety disorders.

One way that meditation practices may produce these benefits is by altering the brain. The nervous system is a dynamic entity, constantly changing and adapting to the environment. It will change size, activity, and connectivity in response to experience. These changes in the brain are called neuroplasticity. Over the last decade neuroscience has been studying the effects of contemplative practices on the brain and has identified neuroplastic changes in widespread areas. In other words, meditation practice appears to mold and change the brain, producing psychological, physical, and spiritual benefits.

In today’s Research News article “Meditation-induced neuroplastic changes of the prefrontal network are associated with reduced valence perception in older people.” (See summary below or view the full text of the study at: https://www.ncbi.nlm.nih.gov/pmc/articles/PMC7058252/), Chau and colleagues recruited adults 60 years of age or greater who had no meditation or relaxation training. They were randomly assigned to receive an 8-week program of 22 sessions of 1.5 hours each of either attention-based compassion meditation training or relaxation training. The participants were instructed to also practice at home daily. Before and after training they were measured for emotional valence (the difference between the magnitudes of positive and negative emotions) and arousal (overall magnitude of emotional responses relative to neutral) with an Emotional Processing task involving emotional ratings of positive neutral and negative pictures. They were also measured for attention with a Stroop task. In addition, they received a functional Magnetic Resonance Imaging (fMRI) brain scan.

So, improve emotion processing by the brain with meditation.

“Meditation can help tame your emotions even if you’re not a mindful person.” – ScienceDaily

We included healthy older participants in an active-controlled experiment. They were involved a meditation training or a control relaxation training of eight weeks. Associations between behavioral and neural morphometric changes induced by the training were examined.

The meditation group demonstrated a change in valence perception indexed by more neutral valence ratings of positive and negative affective images. These behavioral changes were associated with synchronous structural enlargements in a prefrontal network involving the ventromedial prefrontal cortex and the inferior frontal sulcus. In addition, these neuroplastic effects were modulated by the enlargement in the inferior frontal junction. In contrast, these prefrontal enlargements were absent in the active control group, which completed a relaxation training. Supported by a path analysis, we propose a model that describes how meditation may induce a series of prefrontal neuroplastic changes related to valence perception. These brain areas showing meditation-induced structural enlargements are reduced in older people with affective dysregulations.

We demonstrated that a prefrontal network was enlarged after eight weeks of meditation training. Our findings yield translational insights in the endeavor to promote healthy aging by means of meditation.